Home Featured Articles A Brief History of: The Commodore 64 (C64)

When it comes to the early console wars, most gamers only know one name and that is Atari. But there were other console manufacturers that made their mark on the industry before succumbing to the whims of the market or falling under the weight of their own irrelevance and these bits of kit deserve as much love and respect, if not more so, than those names we know and love.

Though Sega and Nintendo would later come to define the console wars and video game rivalry even unto today, the Commodore 64 not only presented a compelling alternative to Atari home devices but also produced a stable of classic games such as Bubble Bobble, Maniac Mansion, California Games, and Summer Games.

Not only that but the Commodore 64 introduced people to the idea of using a computer for a wide variety of daily tasks in addition to gaming.

An 8-bit home computer that debuted in January 1982 at the Consumer Electronics Show, the Commodore 64 by Commodore International was the reigning king of the 8-bit computer market from its debut until 1986, capturing some 40 to 60 percent of the market in any given year and beating out competitive offerings from IBM, Atari, and Apple. The Commodore 64 was such a commercial success that it still holds the distinction today of being the single best-selling personal computer in history with estimated lifetime sales between 10 million and 17 million units. Part of the reason for the Commodore 64’s success was its wide distribution network which included vendors outside of the traditional electronics channel and truly brought the device to the greater masses. In addition, Commodore International instituted rigorous cost controls and moved the manufacture of many parts in-house in order to accomplish this goal.

The aforementioned Maniac Mansion and Bubble Bobble among them, the list also include such titles as Turrican II: The Final Fight and Wasteland. For those of you unfamiliar with the latter title, Wasteland is the spiritual predecessor and inspiration behind Interplay’s first Fallout game. It offers much the same setting and gameplay as the later RPG, though in a much more primitive fashion, and is still an amazing game to play through even today. Maniac Mansion is another classic game that inspires titles today like Thimbleweed Park. 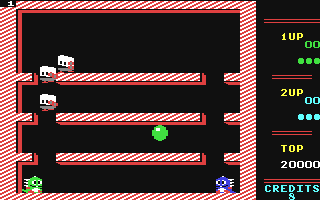 What makes the Commodore 64 so important to video game history, and, indeed, the broader world of electronics itself is that through its ubiquity it was able to bring the magic of the PC to a wider audience than any of its competitors. Truly, the tale of the Commodore 64 gives credence to the aphorism that the light that burns twice as bright shines half as long.
TAGc64 commodore 64
Previous PostWhy I Love: The Secret of Monkey Island 2: LeChuck's Revenge Next PostThe Top 10 Underrated Master System Games