Debuting all the way back in 1981, Konami’s Frogger is an arcade classic that everyone with an video game street cred to their name knows. A classic of the golden age of arcade games and distributed by future console titan Sega, Frogger has sold 20 million copies worldwide since its launch and continues to be a fixture of classic arcade gaming to this day.

Depending on the arcade cabinet’s settings, the user can begin with 3, 5, or 7 frogs. There aren’t any buttons to press, only a four-direction joystick. While the game allows for two players, there can only be at most one frog on the screen at a time. The objective of the game is simple but often easier explained than done in some games. Your goal is to guide your frog across the street to safety. Doing this means avoiding all manner of road obstacles such as cars and trucks. In some stages, you even cross a river after making it through the traffic, avoiding all kinds of wildlife and obstacles. The game is often noted for its difficulty and myriad of ways a frog can die. 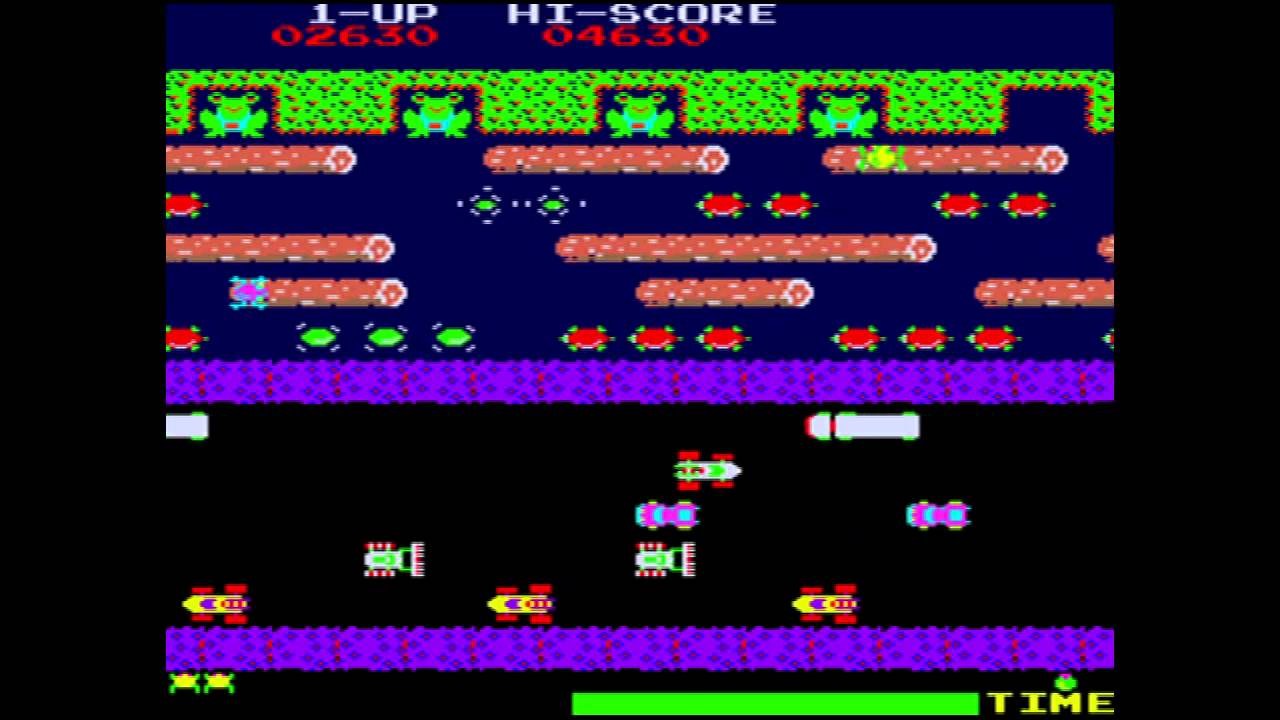 As levels progress, so too does the difficulty. Making all of this really tough is a timer that the player has to beat in order to complete a level. If you don’t get your frogs to safety before the time is up, you lose. This time-pressure mechanic not only makes a seemingly mundane game tough as nails but also creates artificial frustration that leads to player error. Basically, Frogger has nailed difficulty down and even perfected it as an art.

And that is why Frogger is an arcade hall of fame classic. Like Pac Man, Frogger has immediately accessible gameplay but rewards players who master its ins and outs. Rewarding mastery and skill while remaining a pick up and play game for casual people is a tightrope few titles walk successfully, but Frogger does it without breaking a sweat.

The graphics are primitive and there is little to call “iconic” with the design. That said, the game is immediately identifiable with the golden age of arcade games and is perhaps a cut above the standard fare of the day. There are numerous sequels and clones of the original Frogger, but only the arcade game really stands the test of time. Modern fans of twitch-based games and old classic arcade games will love Frogger and, if you haven’t played it yet, you should probably give it a try.

Not obscure by any means, Frogger is just less well known than games like Pac Man. Every bit as deserving of praise as Pac Man is, Frogger belongs in the video game hall of fame simply because it demonstrates that difficulty and simple controls can work wonders for what is in essence a primitive game. Indeed, mastery of these two gaming fundamentals not only makes a good game, but produces a classic.