Published by Namco in Japan and Midway in North America, Galaga is the sequel to the 1979 game Galaxian and like its forebear is a shoot ‘em up game in the vein of Taito’s Space Invaders but with unique gameplay features that make it a distinct and separate experience.

One of the most revered titles of the “golden age” of arcades back in the 1980s, Galaga has ports to almost every classic and modern console with its most recent Galaga 30th Collection for iOS. 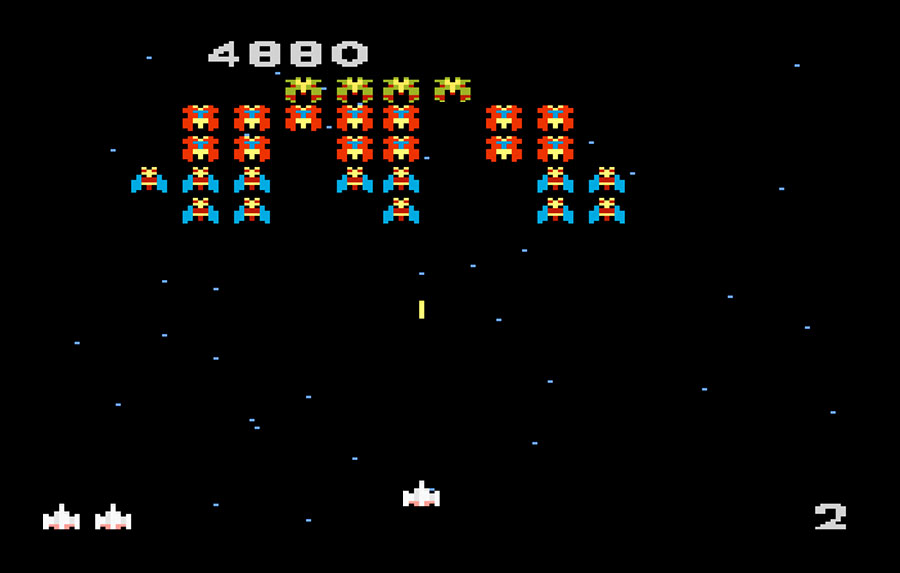 With a simple objective – score as many points as possible by destroying insectoid like ships – Galaga attacks the player in formation waves, suicide strikes, and every other kind of way possible to take out your starship. Like most games in this genre, Galaga works on a lives system meaning once you’ve run out of “lives” or “ships,” it’s game over.

Unlike Galaxian, Galaga allows the player to fire two shots, either in rapid succession or one trailing after the other. Not only does this heavily modify the strategies players use to avoid getting their spacecraft destroyed but also helps tackle the more complex patterns the enemies in Galaga throw at you. Further, Galaga adds in “challenge” stages every few rounds to award players with bonus points, a feature not found in Galaxian.

A raving commercial success, Galaga’s ability to take concepts introduced in other games including its forebear Galaxian is a testament to the ability of companies to innovate while being derivative. Perhaps a more modern example of this would be Fortnite in comparison to PlayerUnknown’s Battlegrounds, where one title paved the way for the other which, coincidentally, happened to become the definitive game in the genre.

And for many people, Galaga is that game.

More challenging than Space Invaders and more innovative and unique than other titles in its day, Galaga’s adherence to classic arcade mechanics while ramping up the challenge gradually is a study in good game design. One unique gameplay feature found in Galaga is the ability for boss Galaga, units that take two hits to kill, to capture your spacecraft and use it in their defense.

Few games capture the magic of the early arcades quite like Galaga does and even fewer games live up to the hype of then unto now. Galaga is a game that maintains its timeless quality and ageless mechanics, making it not only a foundational arcade game from the golden era but also a must-play title for the current one. If you have a smartphone, or a computer, or a home console, you can experience Galaga even today and that’s a trip every gamer should make once in his life.