If there is one area that the early Sega company had mastered it is the arcade and one title that many gamers have played is Golden Axe, the fantasy-themed beat ‘em up starring an amazon, a barbarian, and a dwarf as they roam the land battling towards the final confrontation with Death Adder.

Mixing melee action and magic special attacks, Golden Axe presents a world with a Tolkien aesthetic and a brawler’s spirit. In the classic tradition of the day, there is a story but the narrative is brief and unobtrusive. If any, Golden Axe is made to eat your quarters and it excels at that with a blend of difficulty and fun that keeps you coming back for more.

The graphics and the sound were also part of the experience, all overlaid on top of a musical score that was intense and pushed the cabinet’s sound system.

Later games such as Streets of Rage would take a lot of inspiration from Golden Axe even though they never had arcade installments. When it came to home ports, Golden Axe on the Sega Mega Drive is one of the most popular launch games to accompany the 16-bit system’s launch. Not only did Golden provide an awesome first-player experience but it was also a fun as heck game in co-op.

Though never delving into the depths of unfair challenge that plague so many arcade games, Golden Axe does become repetitive in that the hordes of baddies become more difficult in terms of overall life they have but their tactics, nor appearance, ever changes. 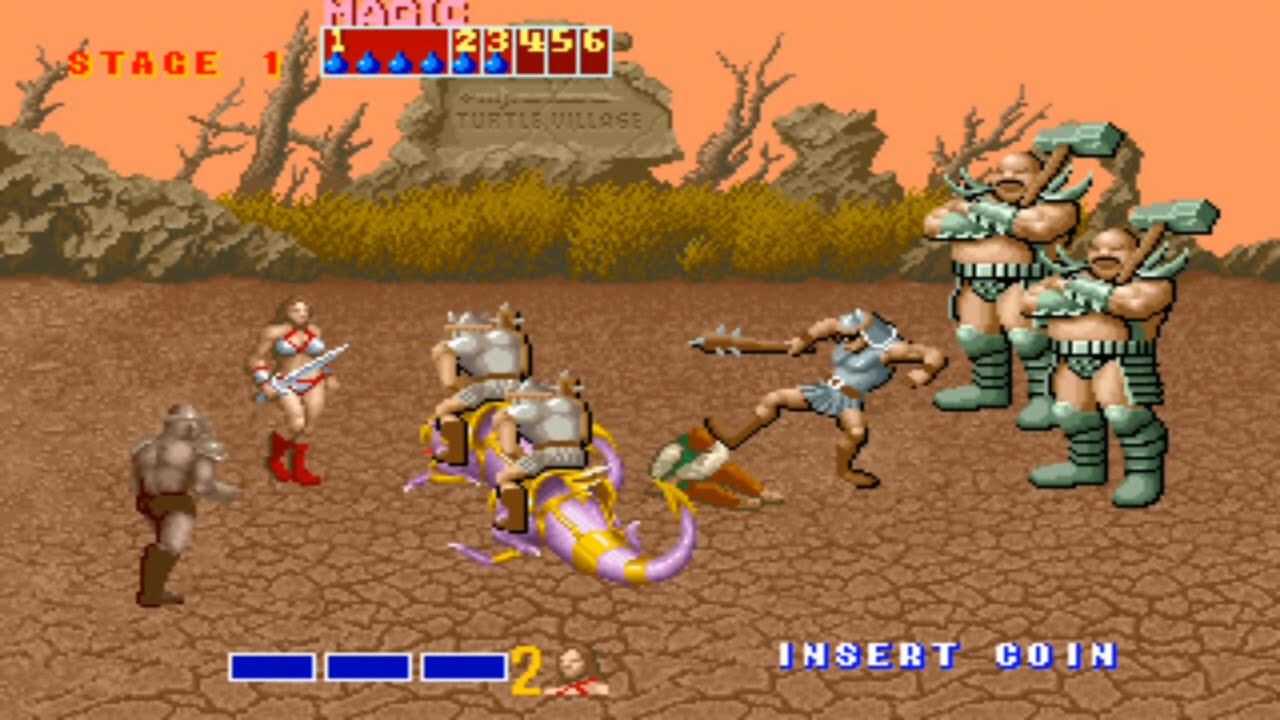 For that matter, the fighting moves your character employs don’t change either. You do have some leeway in how you want to play the game based on the character you pick but that’s it. The amazon female warrior moves fast while the male barbarian moves more slowly. The dwarf is a nice middle ground with many people preferring him because of his ax’s reach. In terms of magic each has a different form of magic that they can summon as a special screen-clearing move during the game.

Obtaining potions to power these spells can be done both during the stage and in special stages that follow each. There is a bit of a strategic element to using this magic and you probably want to save it primarily for boss encounters although it is also a good idea to use it before losing a life. You can also ride beasts that you encounter in the game, some of which are capable of breathing out a fireball attack and all of which are capable of some kind of melee attack. For the day, this was pretty mind blowing stuff.

While not included in the arcade version, home console ports of Golden Axe had a duel mode wherein one player could square off against another using the character of their choosing. Another modern feature was the survival mode that pitted the player against increasingly more powerful characters. When looking for influences for later games like Streets of Rage or Capcom’s Final Fight, it is hard if not impossible to discount the influence of Golden Axe for the arcades.