Konami was the king of the arcade beat ‘em ups in the 1990s. A genre ostensibly popularized by Capcom’s Final Fight, Konami took it to new heights with such classics as the Teenage Mutant Ninja Turtles Arcade Game and the X-Men Arcade Game that followed it in 1992.

Found in two-player, four-player, and even six-player configurations, this staple of the arcades brought the then relatively unknown X-Men into the popular consciousness of audiences across the world, introducing gamers to the likes of Cyclops, Wolverine, Storm, Colossus, Dazzler, and Nightcrawler.

Set up in much the same way as its stablemate the TMNT Arcade Game, the X-Men Arcade cabinet throws wave after wave of enemies your way as you and a friend or more fend them off using martial prowess and mutant special moves.

In what would later become a trop of arcade-style beat ‘em up games, using a special ability drains your character of health but tends to have a screen clearing effect. This makes it deadly in combat and a something players will want to keep in their back pockets. 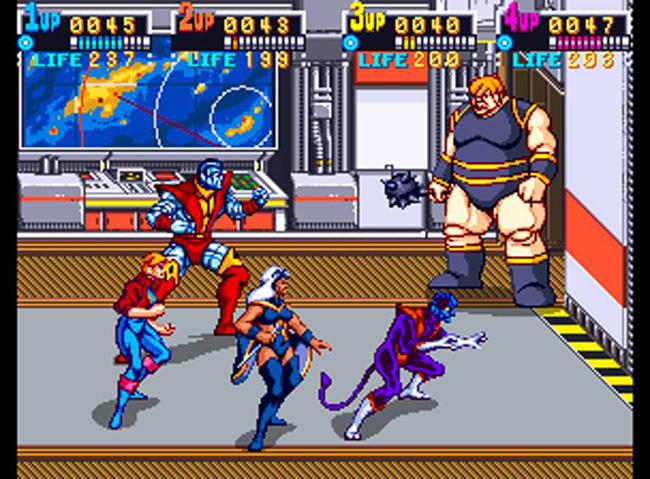 Using a graphical art style that borrows heavily from the comic book series upon which it is based, the X-Men Arcade Game also draws upon anime and manga inspirations in its final execution which gives the game a crisp and unique look. Though not unique today, comic book games that actually adhered to the rigors of the IP they were borrowing were rare, Konami’s arcade classic being among them. One of the most immediate things that will draw fans and newcomers alike to the X-Men Arcade Game is its beautiful graphics and comic book art style.

In this vein, a lot of the bad guys and their personalities are also ripped straight from the comic books. Oddly, many of the bad guys consist of sentineles who are apparently under the control of Magneto. These robot sheriffs of the X-Men world that hunt down and capture mutants whether they are X-Men or not. Then again, some liberties are to be understood in translating the property to the video game space and this is one of those allowances. One thing that modern gamers will most immediately notice is that, while you have a large selection of characters, there really isn’t much to distinguish one from the other outside of their special attacks. In addition, the reduction of Dazzler, Nightcrawler, and Storm’s abilities to much more simple interpretations may rub some fans of the X-Men the wrong way. For example, Colossus’ mutant ability is not his actual ability from the comic books and its application is curious as well as showing a lack of creativity in what to do with each mutant’s abilities.

But that shouldn’t make gamers fall into the false sense that the X-Men game from Konami is not a polished experience. Routinely cited as one of the best X-Men games ever made, the arcade game would not be eclipsed until the release of Capcom’s fighting game, X-Men: Children of the Atom.