When most people think about the Castlevania series on home consoles, thoughts typically turn to the Nintendo Famicom editions, numbered one through three, or for those who are particularly in the know, perhaps they think about the MSX versions of the game.

Regardless, the point is that Castlevania never was known to be nor popularly understood as a Sega console franchise, that is until the absolutely outstanding Castlevania: Blood Lines.

Competition between the Sega Mega Drive and the Nintendo Super Famicom was intense – some of the most intense the video game industry has ever seen. Before, Nintendo enjoyed relatively unchallenged dominance in most major video game markets across the world. From Japan to Germany, the Famicom ruled supreme and this position allowed Nintendo to dictate what kinds of games would be made for their system. It had a huge impact and made some titles quintessential “Nintendo” games.

Castlevania: Blood Lines, an entry from the popular NES series for the rival Genesis, not only shattered this notion but it also showed how versatile and expansive the Castlevania formula could be, something that gamers could a later taste of in the PlayStation’s Castlevania: Symphony of the Night and the Nintendo DS entries.

Developed and published by Konami, Castlevania: Blood Lines is a Castlevania game in every respect though the vampire in question is Elizabeth Bartley, dracula’s niece, and stars John Morris and Eric Lecarde rather than the whip-touting Belmont clan. These two aspects may deter players but they really shouldn’t.

Set during the time period just as World War I is beginning, the story is probably one of the more interesting in the Castlevania series. One area where the game particularly shines is in its depiction of the locations the player visits in the stages. From amazing special effects to an expectedly great soundtrack, Castlevania: Blood Lines really shines where some other Sega Mega Drive games falter. The quality of gameplay and the overall aesthetic lends itself to being compared with other entries in the series and it comes out favorably in the sum. Interestingly enough, Castlevania: Blood Lines is scored by Michiru Yamane who would also go on to later develop the soundtrack for the aforementioned Castlevania: Symphony of the Night a game whose soundtrack is regarded as not only among the best in the series but also the greatest video game soundtracks of all time.

Castlevania: Blood Lines is a must-play video game for fans of the Castlevania series, a saga with a long heritage of excellence in video games that spans multiple systems. The graphics and story are on par with other entries and some aspects, like the graphical effects and the music, really push the Mega Drive and demonstrate what it has to offer as a system. 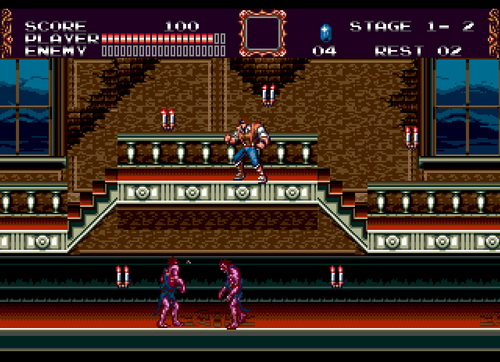 Gamers looking for solid side-scrolling gameplay really can’t do much better on the Mega Drive. Entries like Castlevania: Blood Lines also demonstrate how powerfully effective it can be for developers to branch out from the core gameplay and introduce new things. The game is different, that much is certain upon start up, but it retains enough of its heritage to not only reel in new gamers but thrill longtime fans as well.