Castlevania III (NES) – Think You Can Beat It?!

One of the darkest and most macabre game series from the 8-bit days is Castlevania. Combining a gothic sensibility with platforming mechanics, the Castlevania series has always straddled the line between action game and horror title. Atmosphere plays a huge part of it as does the cast of characters often features in a Castlevania title.

The original title is noted for its overwhelming difficulty and this is no exaggeration. Gamers today will be hard pressed to figure out how people beat this game way back when. Meanwhile, Castlevania fans will marvel at just how far the game has come since then.

But, like many NES games, Castlevania III is what you would call NES hard. Don’t let the choice of multiple characters and pathways fool you – this is still Castlevania at its heart.

What’s at stake is no less than a generation conflict between the Belmonts and Dracula with the world in the balance. Aided by Grant Denasty, Sypha Belnades, and Alucard, Trevor Belmont has to take down Dracula who has unleashed his horde upon the world.

Viewers of the recent Netflix Castlevania series might find this premise familiar as it is the story underpinning the television show. 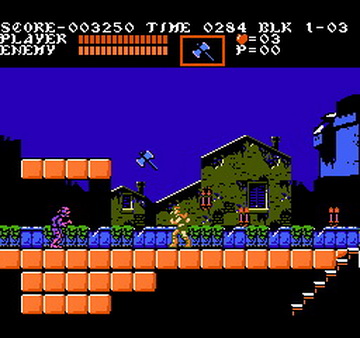 Basically, Konami gives you the illusion of choice but still presents you with pathways that are tough as nails to follow. You use each of the different characters abilities to make it through the game – Sypha’s magic, Grant’s ability to climb on walls, or Alucard’s ability to transform into a bat. This is a mild puzzle-solving element at best and shouldn’t scare people away who think the whole game is like this.

What we have instead, and a first for Castlevania, is a real focus on the story and world of Dracula and his enemies. This game is tough as hell, but you get rewarded with more story as you progress. Probably the first “modern” Castlevania game, Castlevania III is notable not only because it advanced the series in so many different ways but also because it is a kind of swan song for “NES hard,” 8-bit gaming. Make no mistake, Super Castlevania IV was tough and Symphony of the Night was no cake walk, but they weren’t anywhere close to the kinds of difficulty you’d regularly experience in Castlevania I and II (which was difficult for many other reasons as well). Easily the perfect expression of the formula, Castlevania III is the height of the NES legacy of side-scrolling games and is a must-play for fans of the genre, series, and industry alike.