Easily one of the most iconic titles to emerge out of the 1980s glory era of video games is Konami’s Contra, an intense run-and-gun side scrolling shooter that married the best of 1980s film with the greatest gaming conceits straight out of the arcade.

The first thing you will notice about Contra is how hardcore it is. It cuts no corners and takes no prisoners in its quest to distill the spirit of an Arnold Schwarzenegger action flick and a heady science fiction horror film. Really, Contra pays for itself in design alone with some of the most bizarre, off-the-wall creations seen in an NES game.

The aesthetic distinctly marries Ridley Scott’s Alien with the aforementioned Austrian bodybuilder’s Predator but also with a bit of Terminator and Rambo thrown in just to keep it on an even keel.

Not only is this game quintessential 8bit fare, but also it has made an appearance on nearly every system ever released. They all tend to follow the same formula as well – side scrolling stages mixed in with either top-down arenas or front-facing stages. The change in pace is welcome and the switch in graphical style, particularly on the NES, was impressive back in the day. The front-facing view did a good job of conveying walking down a corridor as your player moved from an open-air jungle environment to bunker stage. 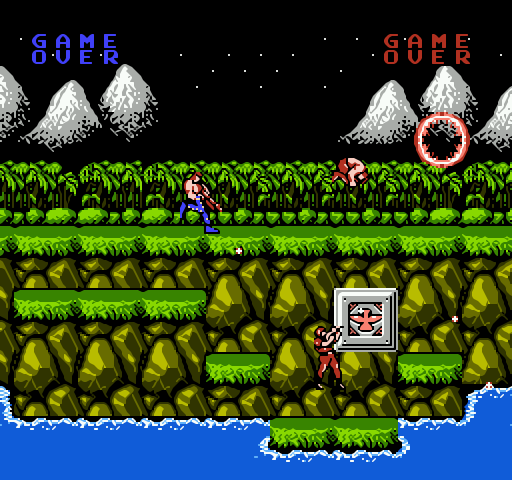 Following a formula that deviates little from entry to entry, Contra prides itself on being tough as nails. Typically one hit and you’re dead with a limited number of lives and continues to boot. Luckily for most players, they can bring a friend along for the ride although this often complicates matters just as much as it helps them. Who hasn’t stolen a buddy’s life in Contra for the NES?

Co-op play isn’t at the heart of Contra but it certainly has a unique take on the concept. As stated above, you can play cooperatively but you can also play selfishly – stealing lives and weapons upgrades. Really, though, everything is so epically tough that it’s all water under the bridge anyway.

Contra is cheap, hard, and unforgiving – much like a bad relationship. But like any good game (or relationship) it has its ups and downs.

Playing cooperatively is one of the original buddy experiences on home consoles and that feature holds up to this day. The only thing that may jar modern gaming sensibilities is just how much this game doesn’t care about your feelings or concerns. Prepare to spend hours mastering levels and, really, a successful playthrough is only possible if both players know the deal.

That said, playing Contra just for the experience of playing it with a friend is worthwhile, especially for a few good laughs. With cheats enabled, you could probably even make it all the way to the end, though tedium may overcome you before your nerves give out.

Gamers looking for a game that captured the zeitgeist of both video games and movies of the 1980s can’t do better than the Contra series.