Digimon Digital Card Battle (PS1) – Metacritic, You got it Wrong!

One gaming sensation that has made itself known more or less in different ways across the world is the popular genre of the card gaming battle. Card games offer some of the rare opportunities for gamers to set aside the moving elements of video gameplay and instead focus on the strategy aspect of it all.  And while Pokemon often gets the lion’s share of attention in the video games press, there are other games in the same vein that deserve attention as well.

When it launched in the mid-1990s, Pokemon was a collectible card game sensation, a strange little diversion from Japan that involved collectible monsters that could be pitted against one another. Not only that, but these collectible card monsters could be upgraded so that their abilities were further honed to perfection.

Digimon was one of Pokemon’s largest competitors back in the day and its world functions on more or less the same principles as Pokemon. Digimon Digital Card Battle is perfect for fans of Digimon and Pokemon alike as it offers that same kind of card battle gameplay that was so addictive back in the day.

Now, Digimon Digital Card Battle is a bit simple in execution and the evolutions for the monsters much more easy to understand – two things that may turn off more hardcore card game players. 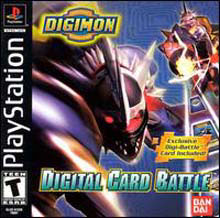 Each player has a deck of 30 cards that contain Digimon, support, and evolution cards. The “Digivolution” system is similar to other Digimon games except for Digimon skip over the Fresh, In-training and Mega phases of development (Mega Digimon appear as Ultimate). To gain “Digivolution” points, players sacrifice the Digimon cards they are holding in their hand to build up DP until the player has enough for the desired evolution. Making the decision about which cards to keep and which to sacrifice adds a huge strategic element to the game and really adds depth where otherwise the game might be considered a much-too-simplistic version of its real-world sibling.

To start the game, players have a choice between three digimon, Veemon, Hawkmon and Armadillomon, and the player can have multiple partners within a deck as the game progresses. 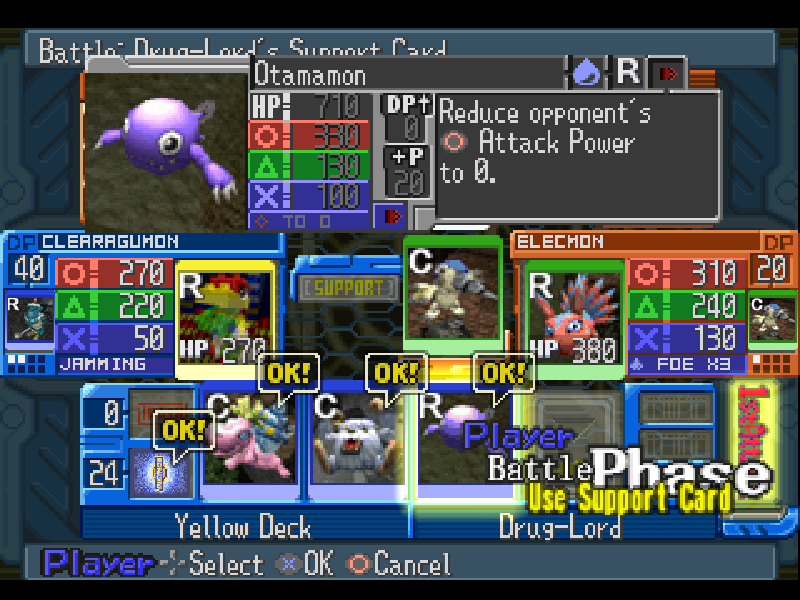 Initially well-received when it was released in Japan back in 2000-2001, Digimon Digital Card Battle did not fare as well in the West where it was perceived as an inferior Pokemon clone with a simplistic card-battle premise. While many Western gamers aren’t as familiar with the myriad of variety of Japanese card games that are out there, card games, nonetheless, remain a huge staple of tabletop gaming. Digimon Digital Card Battle is an excellent pick-up-and-player iteration of a much more complicated game and should be evaluated on those merits.

Indeed, Digimon Digital Card Battle should be praised for its simplicity and robust combat system rather than derided for its lack of a card selection. Remember, back in 2001 what the gamer bought at the store is what the gamer was stuck with for forever – no updates or patches. So if one card is overpowered and completely broken, the whole game is broken. Keeping the range small (and thus the margin of error tight) maintains a sense of gaming balance without coming off as too easy in execution.

The colors and sound are serviceable and par for the course for the day. Considering that the PlayStation 2 was right around the corner, Digimon Digital Card Battle shines more for its gaming concepts than its graphical prowess.