Debuting in arcades in 1989, Golden Axe was yet another blockbuster arcade hit from SEGA that set the company on a path different from Nintendo but which would see the two companies clashing head on in the 16-bit console wars years later. 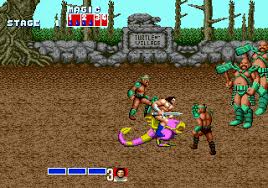 Filled with Conan the Barbarian-style art and narrative, Golden Axe was a side-scrolling beat ‘em up that gave you control of Tyris Flare, Gilius Thunderhead, and Ax Battler as they make their way through hill and dale to defeat the evil Death Adder. Showing off gameplay concepts that would later underpin console classic Streets of Rage, Golden Axe is very much an arcade game from the 1980s.

Laden with high-fantasy concepts and looking every bit the off cast of a black metal movie shoot, Golden Axe’s gameplay “keeps it simple, stupid” and gradually increases the player’s challenge as they proceed through the game. There are no complicated maneuvers to learn, magic to level up, or choices to make – you’re on an express train straight to Death Adder’s lair and it is awesome.

Completely competent as a single-player game, Golden Axe nonetheless shines as a co-op experience. This is because so much of the fun comes from seeing and experiencing the world of Golden Axe together. You and a friend can tactically deploy magic, dominate wild beasts to tame crowds, and work together to take down gigantic baddies bent on doing you harm.

But, for modern gamers, that’s about it. There is no sweeping story that keeps you up to date on the latest details, there are no cinematic cutscenes, leveling, grinding, or other filler content. Golden Axe is pure arcade combat and fans of that will love it. But others might keep asking “is that all there is?” 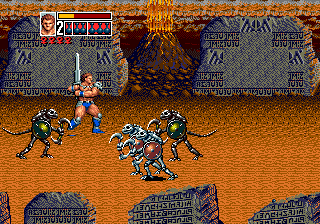 Yes, that is all there is, and it is an awesome time all the while. After all, if you need more Golden Axe action, there are the sequels. They do a better job at fleshing out the world of Golden Axe and telling you a little bit more about the characters you choose. For purists, however, the original arcade Golden Axe is the only choice in this arena.

Like looking back on an archaeological dig and trying to figure out where animals today have developed their features, Golden Axe is almost primeval in its simplicity. But so many pioneering innovations got their start with this game. From co-op combat with a friend to putting a more complex story over top the typical fantasy fare, Golden Axe knows its audience and pushed 1980s arcades to the limits.

Later home ports not only retained all of the charm and the challenge but also kept much of the graphical fidelity and sound as well. Golden Axe wasn’t just one of the first big co-op beat ‘em up games out there, it was also one of the first “arcade perfect” home ports – a sign of the coming end of an era if ever there was one.

Previous PostCastlevania III (NES) - Think You Can Beat It?! Next PostQ!Zone for Quake - You Didn't Buy It?