When it comes to video gaming titans, few are quite as prominent as Rockstar’s Grand Theft Auto series, a marquee title that spawned legions of clones and has evolved into a veritable omnibus of gaming in and of itself. With the latest release Grand Theft Auto V featuring every kind of minigame from racing to the traditional car theft, GTA is setting the standard for the games as a service model and its latest 2013 edition is proving itself to be a cash cow for publisher Take Two Interactive. Indeed, Grand Theft Auto V’s success places it as the Jupiter among the pantheon of video game series and media properties in general, earning the top spot among all media properties of all time with its revenues according to many reports. Of course, this should be of no surprise to people who followed the series since its premier. On debut GTA V earned more money than any previous video game release. Given that it is 2018, GTA V’s longevity is enviable and impressive. The original GTA was a top-down affair!

And that brings us to the subject of our other series: Saints Row. In many ways a clone of the successful formula established by Rockstar with the GTA series, Saints Row is even zanier than Grand Theft Auto and offers a distinctly different though not entirely unique approach to the genre. While not as successful as GTA, Saints Row nonetheless has spawned a roster of sequels and has crowds of devotees the world over. Created by Volition and published by Deep Silver, the original Saints Row debuted in 2006 to both critical praise and commercial success. Though nowhere near the success of Grand Theft Auto, since its last release in 2013 Saints Row has racked up sales in excess of 13 million, placing it among the best selling video game franchises of all time. 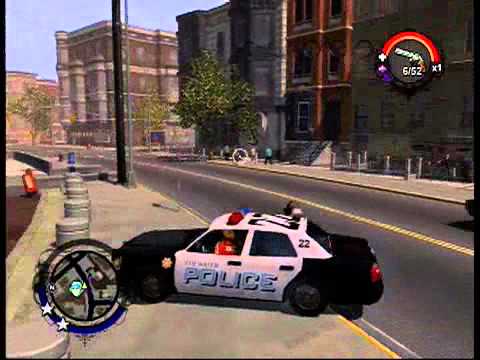 The original Saints Row in 2006

So what ties these two games together aside from a shared open-world playfield? Well, it would be fair to say that Saints Row takes much of its inspiration from Grand Theft Auto but it would be erroneous to write it off as nothing more than a clone.

Started by British developer DMA Design in 1997, Grand Theft Auto’s title references the US legal term that describes the theft of a car. Typically taking place in satirical versions of real-world locations, GTA’s distinctly British heritage makes its humor somewhat more biting and subtle. A real standout moment for the series was the release of Grand Theft Auto III for the PlayStation 2. Not only did this game bring the world of GTA into 3D but it also spawned a raft of sequel for history’s most popular game console, the PS2, and solidified the series’ position as the go-to title for open-world shenanigans.

GTA not only earns its spot in press for its overwhelming sales but also because it never shies away from very adult subject matter. Grand Theft Auto San Andreas’ hot coffee scandal will live forever in infamy. None of that has ever stopped the series from winning award after award nor ceased it from printing money for Take Two. The Daily Telegraph in the UK once remarked that Grand Theft Auto was one of the country’s top exports and, if numbers are any indication, this description is quite on the mark. What does that leave for Saints Row?

Like Grand Theft Auto, Saints Row is an open-world game with an edge, featuring an engaging narrative and bawdy humor that references popular culture. The initial title for the series was Bling Bling but this was later changed. Before its release, the Xbox 360 was totally lacking in open-world titles like GTA and thus the release of Saints Row was highly anticipated, garnering thousands of downloads in beta form. Upon its release it was a sales success and a sequel was promptly ordered.

In the original Saints Row you were the upstart member of a gang and, to progress, you had to help your team eliminate rival gangs in the area. Saying that Saints Row is more deeply inspired by American hip hop culture and film is misleading, as Grand Theft Auto is also heavily influenced by this as well. What Saints Row does that is a little different from the GTA series is approach it all from a more comic book type of perspective. While GTA never shies from the off-the-wall hijinks of other titles, Saints Row embraces illogicality and turns it into an art in the process.

Another difference between Saints Row and the Grand Theft Auto games is that the first two Saints Row entries follow similar characters and offer a continuous narrative. While there are sometime oblique references to events that have occurred in past Grand Theft Auto games, the series does not offer a narrative thread throughout that ties the games together into one cohesive whole. The other games more or less continue this tradition and this gives the Saints Row games a different vibe. While most Grand Theft Auto games revel in their ability to distinguish themselves from one another, Saints Row’s tendency towards cohesive narrative makes the game a welcoming experience for returning players though this could be off putting for newcomers.

While both of their latest entries were released in 2013, Grand Theft Auto V has enjoyed markedly greater success than Saints Row. Why is this? Partially because Saints Row IV was not conceived as a platform for iterating future gameplay or services. Fans of the Grand Theft Auto series have noted GTAV’s lack of downloadable content when it comes to expanding the narrative, a change since GTAIV. But what Rockstar has not held back on is the release of expandable content that creates new and more interesting ways for longtime GTAV players to continue in the game. Whether it is purchasing your own apartment or becoming a gun runner, the latest Grand Theft Auto game is filled with more content than almost any other title out on the market.