Nintendo’s Gameboy was a phenomenon when it launched and gamers across the world each have a fond memory of their favorite portable gaming moment with Big N’s puke green screen. Whether it was Tetris or one of Nintendo’s amazing platformers like the Super Mario Land or the Gameboy ports of Donkey Kong Country, the portable system boasted a roster of amazing games. And if you’re a fan of platforming games, the Gameboy has your covered – in spades.

A tiny snapshot of Gameboy Titles

Most of these games sold millions and received widespread praise in the gaming press. One thing we forget is how many games were released over the lifetime of Nintendo’s Gameboy. Occasionally a game slips through the cracks, and for many gamers this will be one of them.

One overlooked title that you might have missed is Konami’s stellar platformer, Kid Dracula. 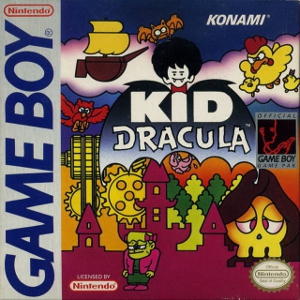 If you haven’t heard of Kid Dracula, don’t worry – it didn’t exactly make huge waves upon release in 1993. You undoubtedly know about Konami’s “other” Dracula-based series, Castlevania, and perhaps the name recognition Castlevania has would have benefited Kid Dracula upon release.

Initially marketed as a parody of Castlevania, Akumajyou Special: Boku Dracula-kun puts players in control of Kid Dracula who overcomes his enemies after waking up from a long sleep. After winning the hearts and minds of the creatures and monsters of Transylvania, Kid Dracula becomes famous throughout the land. As you can already tell, this series is a much more lighthearted approach to the dark mythos of Castlevania (or Akumajyou Dracula as it is called in its home country of Japan).

Playing as Kid Dracula, the player has to defeat Dracula’s nemesis Galamoth using spells and allies along the way. Characters like Death and Dracula from Castlevania make appearances and the story is largely a continuation of the events in Akumajyou Special: Boku Dracula-kun.

The music is appropriate if somewhat whimsical compared to a Castlevania game. Composer Akiko Itoh provides a competent score using the Gameboy’s limited sound chip. There is not one tune that really stands out in this game but nothing is offensive and everything is completely apposite within context.

Programmer Yukari Hayano has crafted a masterful platformer that combines the best of Mario-type games with elements from the Castlevania universe. The presentation really goes to great lengths to underpin everything in this game. It really helps bring the various elements together in a coherent package. Given the title and titular character, a more cartoonish presentation works than something like the Famicom or Gameboy editions of the mainline Castlevania series. The difficulty ramps up steadily as the game progresses and provides a constant challenge without ever becoming overbearing. Gamers should not be discouraged by the Gameboy’s reputation for having notoriously difficult platforming genre games as Kid Dracula is the right balance of challenge and good, old fashioned fun.

Previous PostBlade for the PSX - Metacritic, you got it wrong! Next PostEA's Burnout Paradise is back!