Have you ever played the game River City Ransom or Street Gangs? Then you might be familiar with the iconic art style and characters of Super Dodgeball.

If you’re not familiar with Japanese gaming icon Kunio-kun, you should be. And what better introduction could you get than a dodgeball game that is the definition of addictive. Kunio-kun games are known for their squat character sprites and addictive beat ‘em up gameplay. So you might be wondering what in the heck this genre might have to do with the sport of dodgeball and we’re happy to tell you about this awesome title. 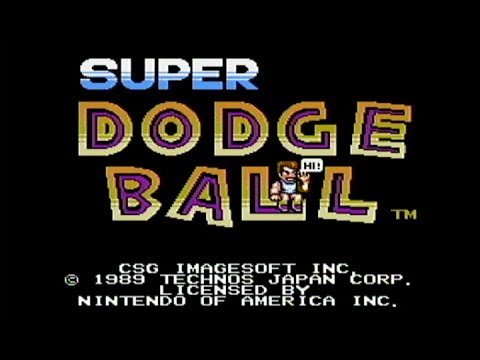 Initially released in 1987 for the arcade, Super Dodgeball by Technos Japan Corp’s Kunio-kun has enjoyed limited exposure in the West but is a prolific and ongoing series in its home country Japan. Originally a beat ‘em up, Kunio’kun’s dodgeball outing is a marked change of pace for the series and one that is memorable more for its excellent gameplay than the inclusion of such an iconic character. Super Dodgeball has since found a home on the Neo Geo, NES, Arcade, PlayStation 2 and even the PlayStation 4.

Of course, in the event of a draw, the team with the most members remaining at the end of the timer wins the match. In a nod to Kunio-kun’s beat ‘em up heritage, each team’s relative strength is represented by a health bar that decreases as players are eliminated.

There are really two main functions for the player: Passing and throwing or catching and ducking if the opposing team is control of the ball. You can also dash by tapping the control stick left or right twice in quick succession. As you can readily see, Super Dodgeball is simple in outlay and complex in strategy. Mastering the game’s simple controls is the path to really getting the hang of this game.

Super Dodgeball even has a narrative: You begin the game in a match controlling either Chicago or Dallas, the winner going on to represent the United States in a globe-spanning tournament of dodgeball. As stated earlier, the game was very much a part of the Kunio-kun series in Japan but this relationship was downplayed or eliminated entirely in other markets. Of course, the Japanese version includes different team names and so on but also different skin tones in a nod to graphical style employed in Nekketsu Kōha Kunio-kun.

Even with all of this heritage and background, the game easily stands on its own. Sometimes video gamers need something a little different for their sports games, and Super Dodgeball fulfills this want with little lacking.