Do you like your platforming games with a hint of darkness to them? Then you might love Ratchet: Deadlocked, a game that takes the conventional Ratchet & Clank series, strips it of a lot of its platforming elements, and amps up the shooter aspects tremendously.

Developed by Insomniac Games and published by Sony Computer Entertainment for the PlayStation 2, Ratchet: Deadlocked goes by the subtitle Gladiator in Europe and is called Ratchet & Clank 4 in Japan. This is the last game in the series to receive a Teen rating, as future iterations would fall under the ESRB’s new E10+. 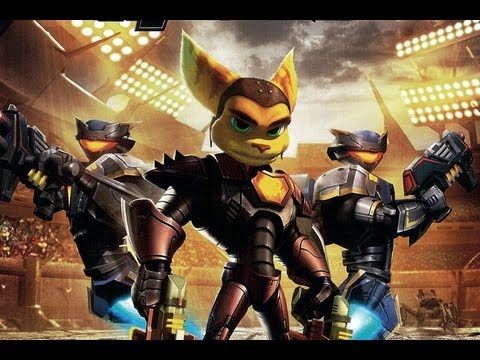 A much darker game in tone when compared with its forebears, Ratchet: Deadlocked will appeal to modern players because it has hints of a battle royale style game buried within it.

Basically, Ratchet and friends are kidnapped and taken to the “DreadZone,” where they are shackled around the neck with an exploding collar and forced to participate in a violent gameshow. If they should decide not to participate or “become boring,” the collar will explode, killing them instantly. How’s that for a plotline? The game centers on these collars and finding a way to escape them and to free the other characters tripped in their vise.

To do this, you play as Ratchet and fight in tournaments across the DreadZone using a variety of weapons to overcome your foes. Again, this outing of Ratchet & Clank focuses on the shooter elements. While this doesn’t mean that previous fans of the series won’t enjoy Ratchet: Deadlocked, it is something to keep in mind before booting up the game.

In two firsts for the Ratchet & Clank series, Ratchet: Deadlocked is the first game to feature online multiplayer and cooperative play in the story mode. This is a huge change from previous games and does add something to the experience although it doesn’t alter the core gameplay that substantially.

Another first, Clank was not playable as a character in this game, much to the disappointment of longtime fans.

The graphics hold up well given the game’s age. While a bit more subdued than other games in the Ratchet & Clank series, Ratchet: Deadlocked is nonetheless delightful in its pseudo-cartoonish presentation. The controls and gameplay are where this title really shines.

If you like on-point shooting action with a high-quality presentation, its really hard to beat Ratchet: Deadlocked even today. Every bit the triple-A title for the legendary PlayStation 2, Ratchet: Deadlocked will probably be of most interest to gamers today who enjoy platforming games as well as battle royale style games. Presented from a third-person over the shoulder view, it is not hard to imagine Ratchet: Deadlocked as the nascent beginnings of just such a game for the Ratchet & Clank series. Perhaps Sony will read this article and become inspired by the idea of such a game set in the Ratchet & Clank universe. If there is one thing that Ratchet: Deadlocked illustrates it is that solid properties are extremely versatile outside of their core genre as long as the gameplay and production values are there to back it up.