The classic Kunio-kun series of games, known as River City Ransom when it made its way outside of Japan, is one of the longest running and most storied franchises back home in the land of the Rising Sun but a relative unknown outside of that region which is a shame as it is not only one of the most engaging co-op fighting game series ever made but also one of the single most reliably challenging titles on the market.

Developed and published by Technos Japan and debuting for nearly every available format back in 1989, the action, role-playing beat ‘em River City Ransom employs a graphical style that is all its own and involves squished, manga-inspired sprites battling their way across a variety of vistas drawn Japanese life.

As Alex and Ryan and tasked with saving both River City High School and Ryan’s girlfriend Cyndi from Slick, our two heroes will battle through hordes of other gangs with leaders acting as the bosses of the stage. With names drawn from high-school stereotypes the gangs in River City Ransom are a tongue-in-cheek nod to a somewhat universal experience in the developed world – going to high school – and gives it a coat of Final Fight for good measure for a game that is whimsical, charming, and tons of fun with a friend. Reminiscent of the Double Dragon series of games, River City Ransom for the NES is also 8-bit hard and somewhat unforgiving. Though the title has always changed up venues and gameplay elements, the core difficulty remains one of its charms – or foibles, depend on who you ask.

Purchasing in-game items as well as mastering River City Random’s fighting techniques are only two parts of being good at the game. Another huge part of it is crowd management and this means that when you work with a friend the two of you really need to nail down your rhythm in River City Ransom or you won’t make it that far. Beat ‘em up games are always a roll of the dice, but thankfully River City Ransom never drones on and on with the same moves and, instead, allows a great degree of customization through power ups and the like.

It’s rare that a playthrough of River City Ransom is boring and, indeed, compared to many modern games there’s a lot Technos’ masterpiece could teach about game design and replayability. 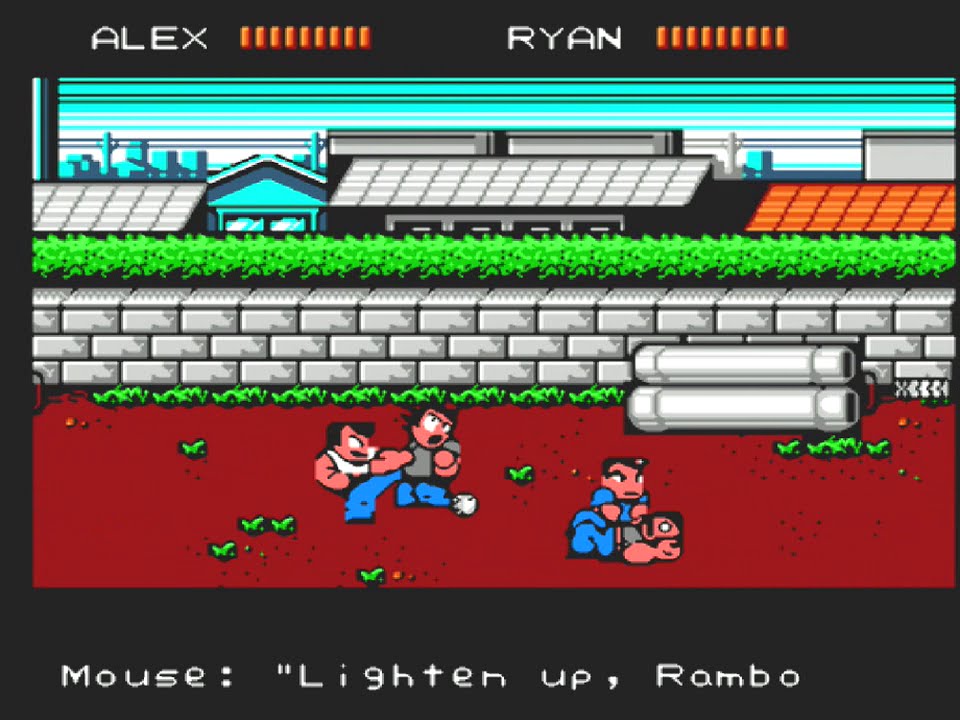 Other core elements are present and accounted for, of course, and Technos was careful to make sure that River City Ransom was both charming and compelling in its gameplay. Music, graphics, and story all hold up well even this many years after its release and the game serves as more than just as a touchstone for the beginning of the series. Though not as complex as some of the more modern titles, River City Ransom nonetheless has everything a gamer would expect out of a classic co-op title and offers one of the most fun experiences to be had with a friend on the NES.