Home Features Shadow of Destiny (PSP) – Metacritic, you got it wrong!

Shadow of Destiny (PSP) – Metacritic, you got it wrong!

Sometimes when a game is ported from a home console to a portable something is lost in the translation.

In other instances, what was a mediocre home experience could be a dynamic, powerful portable playthrough. Method of delivery does matter and should be considered in a game’s review. Such is the case with the console and portable versions of Konami’s Shadow of Destiny.

Known as Shadow of Memories in Japan, Konami wonderkind Junko Kawano’s Shadow of Destiny for the Playstation 2 and, later, Sony PSP, is one of those hidden gems that modern gamers need to reference when looking back at the history of narrative development in videogames.

While not the most visually stunning title, nor the most action-heavy experience, Shadow of Destiny nonetheless capitalizes on Konami’s penchant for the eerie and weird to produce a dramatic flourish worthy of the designation of hidden classic.

The game opens with the death of protagonist Eike Kusch and takes players to the fictional German town of Lebensbaum (Life’s Tree). In a procedural experience, Eike must discover who his murderer was and prevent his own impending doom.

Using an interesting time-travel mechanic, the player zips back and forth between different time periods in an effort to change the past and impact the future in a way that prevents Eike’s death. While not the most innovative trope to hit a videogame, it is woven intrinsically with the narrative in such a masterful way that Shadow of Destiny escapes the cliched directions such time travel games often take. 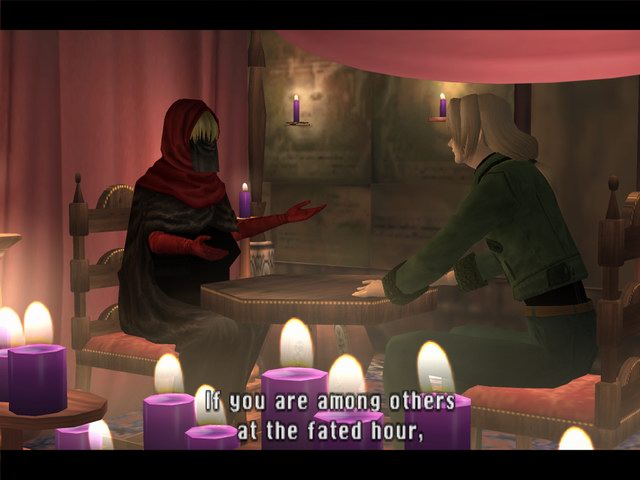 Interacting with other characters

Frustrating for many reviewers during its release, Shadow of Destiny lacks any action elements, even going so far as to eschew the player health bar. Eike cannot attack, only interact with the world around him. The bulk of the gameplay revolves around this discovery of items and interacting with non-player characters – features that some players might find plodding at best and mind-numbingly boring at worst.

One thing that encourages playthrough for those that love the game, and hearkens back to Kawano’s other classic for Konami, Suikoden, are the multiple endings the game has. Depending on the specific actions undertaken by the player character during the game, the ending will consist of one of eight possible scenarios.

Initially favorably received when it released on the Playstation 2, reviewers were less kind to the PSP port.

The graphics on the original Playstation 2 received mixed reviews at best and the scaled-down representation offered by the PSP may have negatively impacted the game in the eyes of some reviewers but this does not impact the core gameplay and narrative which remain solid to this day. It is hard to remember a day when portable games were shallow affairs. But the advent of increasingly powerful portable gaming technology has rendered this concern moot.

Shadow of Destiny on the PSP is a game the critics overlooked and a portable classic not to be missed. If you’re a fan of Konami’s trademark storytelling style then you need to check this game out.