The Super Nintendo’s release in 1990 proved that lightning could strike twice for the popular Japanese video games company as the system not only helped maintain the momentum established by its NES forebear but also innovated in many key areas of gaming.

One of these areas that the SNES dominated, though not quite to the extent its successor the Nintendo 64 did later in its history, is multiplayer gaming. With a multitap bringing four-player action to the home console, the SNES was poised to offer gamers a range of experiences that more closely mimicked the arcade than ever before. And that was quite a big deal back during the SNES’ reign. You see, bringing the arcade home, with its loud, colourful action and ability to support multiple players was part of the goal of video games. Now that arcades have largely fallen away we see multiplayer games that take advantage of online capabilities as well as a larger population of players. Gone are the days when multiplayer, of necessity, meant the other people in the room.

For those of us that can remember though, Sunset Riders for the SNES is perhaps one of the best pre-Internet multiplayer games for a home console ever made. 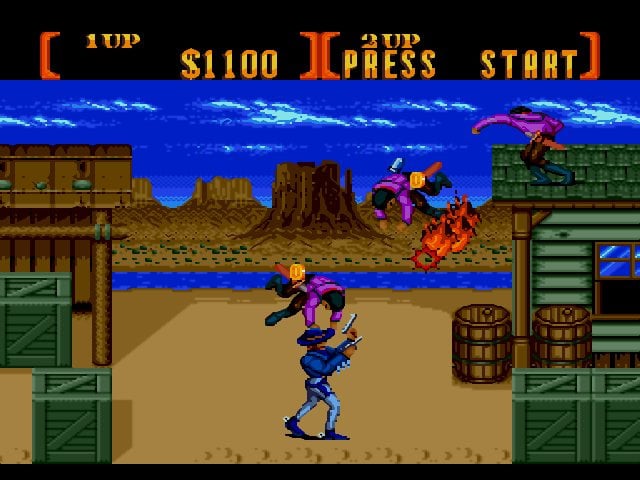 Released to arcades by the masterminds over at Konami in 1991 and with later ports to the SNES and Sega Genesis in 1992 and 1993 respectively, Sunset Riders was part of the company behind Teenage Mutant Ninja Turtles The Arcade Game and The Simpsons Arcade Game’s iron grip on the arcade scene in the early 1990s. Few companies could touch Konami’s cabinets, and, outside of SNK, few did.

As the title implies, the game is set in a fanciful take on the American Old West and puts players in the boots of a run and gun cowboy who has to face down endless waves of enemies. Players that are familiar with shoot ‘em ups know this mechanic well and to support this the controls are crisp and simple. With eight directions and two commands there really isn’t a lot to focus on here when it comes to controls although the game does reward absolute mastery of this relatively simple scheme in later stages. 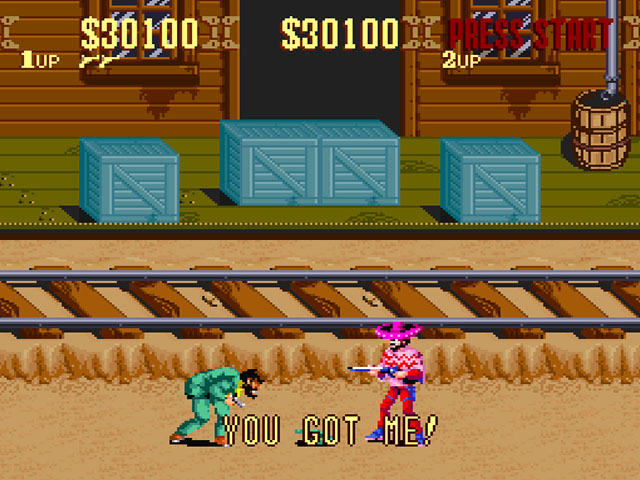 Of course, as players make their way through the stage they can pick up power ups and special items to give them time-limited abilities but the core of the gameplay is fast-paced shooter action meaning every moment counts. This is because it’s a one hit and you’re dead type of deal, like most classic games, but even more so in the arcade where the mechanics of the game actually favour making you waste lives.

Though the Mega Drive version is an excellent port of the arcade concept, nothing quite compares to the SNES home version when it comes to distilling the arcade experience.

If you’re looking for an amazing co-op game from the 16-bit era and want a taste of something “they don’t make ‘em like they used to” anymore, then Sunset Riders from Konami is just your ticket to ride.