Super Empire Strikes Back (SNES) – Think You Can Beat It?

The classic George Lucas trilogy of science fiction space opera got a Super Nintendo treatment that still stands out for how good the games were and how closely they hewed to the script established in their respective films.

As you can imagine, in The Empire Strikes Back you assume the roles of various heroes from the film, specifically Luke Skywalker, Chewbacca, and Han Solo, and make your way through the scenes depicted in the film while accomplishing video game-like objectives. Familiarity with the plots of the Star Wars movies is not necessary to enjoy the game though it may broaden certain experiences or make them richer in the process. 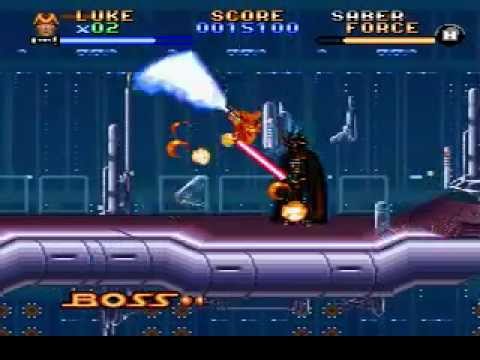 Though there is little doubt that Super Star Wars: The Empire Strikes Back is a movie-related property, it avoids a lot of the pitfalls that most of those games used to fall prey to by keeping the basic vibe of Star Wars first and foremost throughout the game. This means that graphics, sound, and gameplay scenarios evoke the films rather than distance themselves from them as was so often the case with film-to-video-game properties back in the day. If you’ve ever picked up a game and wondered what in the heck this has to do with “insert franchiser here,” that’s because it was typical for devs to transform an established concept into a video game that was compelling. This is why Sunsoft’s Batman for the NES makes handy use of gun-based weapons while the comic book and film Batman largely relied on hand-to-hand combat – something that would tire quickly in the simpler space of a video game. Created during a pivotal time in the history of the Star Wars franchise, Super Star Wars: The Empire Strikes Back takes full advantage of the SNES capabilities to deliver a cinematic experience in a cartridge format. With the prequels just around the corner, THQ decided to re-release these Super Nintendo titles alongside the remastered original trilogy in order to commemorate the coming era of Star Wars. Existing in the time before Star Wars was resurrected cinematically, Super Star Wars: The Empire Strikes Back is a time capsule of a game from a period when devs were still trying to figure out what it meant to have a film-based video game.

Given the massive success of the Star Wars properties, this was a bit of a safe space to figure out what to do with them in game format as anything released would likely be commercially successful. Praised during their release for sporting excellent graphics and a true-to-franchise outlay, Super Star Wars: The Empire Strikes Back is a must-play for any Star Wars fan.

Previous PostRaptor: Call of the Shadows (PC) - Think You Can Beat It? Next PostPlayStation Classic (a PS1 Mini Console) by Sony!