The Crow: City of Angels is the sequel to the 1994 original starring the late Brandon Lee, son of Bruce Lee, who died after a tragic accident on the set. A fantasy action film by Tim Pope, The Crow: City of Angels takes place in Los Angeles and follows the mythos of The Crow movie established in the previous film. While the first film has a cult following the second film didn’t quite do as well with fans. So it is kind of strange that it spawned a video game installment, but here we are.

Created in the vein of a beat ‘em up, The Crow: City of Angels is viewed from an isometric perspective that is not only strange given the game genre but jarring for the player. It is difficult to tell whether or not hits are landing. The graphics utilize 3D polygonal models on a 2D background which is ok if it is done right but in this game it comes off a bit strange. The game has pretty much the same look across all platforms – another odd aspect of it – so really you can’t go wrong no matter whether or not you choose the Sony PlayStation, Sega Saturn, or PC Windows version.

Quality is lacking in execution on all fronts. The graphics are a smorgasbord and it controls like a rickshaw missing a wheel. One thing that really didn’t help the game is that it came out an entire year after the movie upon which it was based, further killing any incentive to pick it up. As mentioned above, the movie it was based on was a bit of a dud so it looks like no one really missed out in the end.

The music is abysmal as well and a bit laughable at points. The Crow: City of Angels drives towards a goth-edge-chic that really doesn’t translate very well to the video game format. It’s hard to recommend this game to fans of the movie and people in general but it is a bit of a relic in that it captures the zeitgeist of the late 1990s in a way few games can.

So if you have a craving for a late 1990s action game that vaguely follows the movie from which it takes its name then The Crow: City of Angels is what you need but the rest of us might need to look somewhere else for our isometric beat ‘em up. 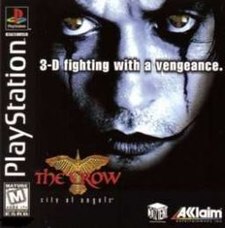 A 3D Fighting Game “with a vengeance”