Home Retro Gaming News The Lion King (SNES) – Think You Can Beat It?

The Lion King (SNES) – Think You Can Beat It?

One of Disney’s most iconic films, The Lion King is a tale of a young cub rise to take his father’s place as the head of jungle kingdom and, in the popular tradition of celluloid media from Walt’s company, spawned a slew of related products among which include a tough-as-nails game for the Super Nintendo.

Developed by Westwood Studios and published by Virgin Interactive Entertainment, The Lion King for the Super Nintendo came out in the winter following the cinematic release and goes to great lengths to recreate the signature animation style that is associated with Disney in a video game. This is partially why the game’s graphics still hold up so well today. But the game is rarely noted for its graphics, which are beautiful, but more often is known for its insanely challenging difficulty – particularly given this game’s bend towards an audience mainly consisting of children. 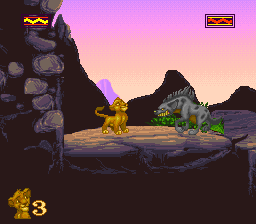 Combining the best of platforming with the whimsy of a Disney world, The Lion King is at times reminiscent of other titles like Disney’s Aladdin or even Nintendo’s Super Mario World but Westwood Studios does a great job of varying up the action so that The Lion King isn’t a straight up platformer. Platforming stages are often broken up with other types of almost mini-game esque levels. A lot of the actions that the player is allowed to take center around where Simba is at his point in life. One thing that you will notice is that this game is tougher than what you would think, demanding pixel perfect jumps and all manner of precision platforming that is often a detriment rather than encouraging fun.

The child Simba has different abilities than the adult Simba but, generally, the two timelines have convergent rather than divergent gameplay styles. Making your way through stages will often consist not only of the aforementioned platforming action but also in solving puzzles and in general exploring the stages. The use of bugs to restore or take away health also makes its way over into the exploration portion of the game as hidden bugs in each level can be used to unlock secret levels. A lot of The Lion King’s replay value comes from these kinds of hidden secrets in each stage.

Featuring a narrative largely inspired by the story found in the film of the same name, the game’s stages take their artwork from various scenes presented in the movie as well. A real treat for fans of Disney’s movie work, The Lion King also shows off how absolutely timeless Disney’s approach to art and storytelling really are. You can completely absorb the main points of The Lion King tale just by playing this game – no need to reference the film at all! Of course, fans of the movie will find a lot to love outside of just the art style with the sound effects and music also inspired by the Hollywood production as well. Coming at a time in gaming when movies-to-games often involved a months-long wait after the initial release, The Lion King largely meets the expectations of the day and that is to capture the spirit of the popular film in a video game form. Though the trend today is to have different stories or even “gaiden” like side stories as the focus of the video game iteration, The Lion King for the Super Nintendo embraces its heritage as a film-based game and does its best to deliver the cinematic experience in a silicon format.