The Atari 2600, known as the Atari Video Computer System before 1982, is perhaps one of the most well-known and successful home consoles of all time, largely kicking off the era of video game consoles as we know it now.

No console more clearly illustrates Atari’s immense influence and their precipitous fall. Released in September 1977, the 2600 was the first kit to use microprocessor hardware and game cartridges, a format that would be continued on through the Nintendo 64 entertainment system in the mid-1990s. For much of its life the Atari 2600 was the Video Computer System until the release of Atari’s follow-up system, the Atari 5200 in 1982, The 2600 took its name from the microprocessor found inside of it, the 2600, as the 5200 did the same with its microprocessor. Originally the unit came with two controllers and the pack-in title Combat (later, Pac Man). Unlike most previous consoles that used custom logic to play games, the Atari 2600 was the first complete CPU home console.

Here are the 10 top games for the Atari 2600 according to our humble opinions:

Warlords is one of those really awesome PONG clones that often gets forgotten about when people talk about the Atari 2600. Sure, PONG developed the gameplay style that this game uses, but Warlords adds a few tweaks here and there to keep it interesting. A fireball bounces around the screen back and forth between the two opposing knights. They knock it between the two of them until one misses and the other player scores – simple PONG type stuff really. It’s a best of 5 rounds setup and the player to win the most at the end wins the match. 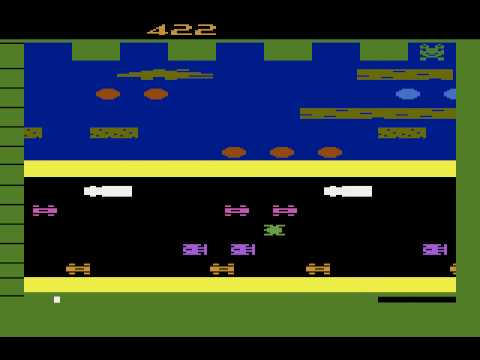 The arcade classic on the Atari 2600 is everything you would want it to be and more. Frogger tasks players with crossing a busy street as a frog, hopping from one lane to another, dodging traffic all the while. It starts off quite simple and slow really but ratchets up the action with lightning speed. The game was a sensation in the arcades and was sort of akin to Pac Man on steroids. It even spawned a really famous Seinfeld television skit where George tries to preserve his high score on Frogger by moving an arcade cabinet across the street, Frogger style, while the unit is still plugged into the wall via extension cord. On the 2600 Frogger was noted for its bright, colorful graphics and faithful arcade translation. 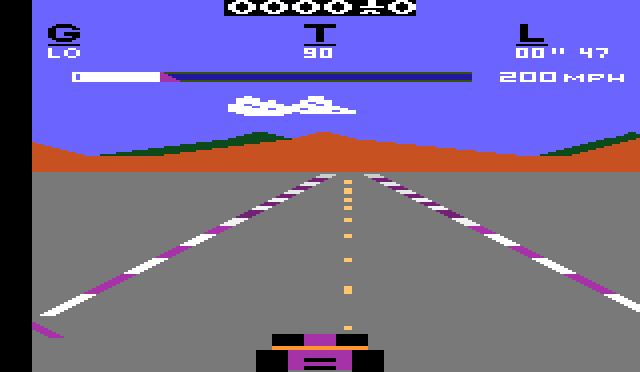 Who doesn’t love a good racing game? And on the Atari 2600, there were fewer games better than Pole Position, perhaps one of the biggest titles on the system and the granddaddy of console racing games. One unique thing that Pole Position did that you don’t see anymore in racing games is that the acceleration was automatic. That is, as soon as the race began the car started moving forward. You only had control over a brake button that you could use to slow the car down and stop it but you had zero control over speed. As you can imagine, this made for some intense action. On the arcade you would bob and weave out of traffic, zooming along pixel corridors until you took home the gold. The Atari 2600 is largely the same: Bright graphics, iconic sound, but most important of all – intense gameplay. 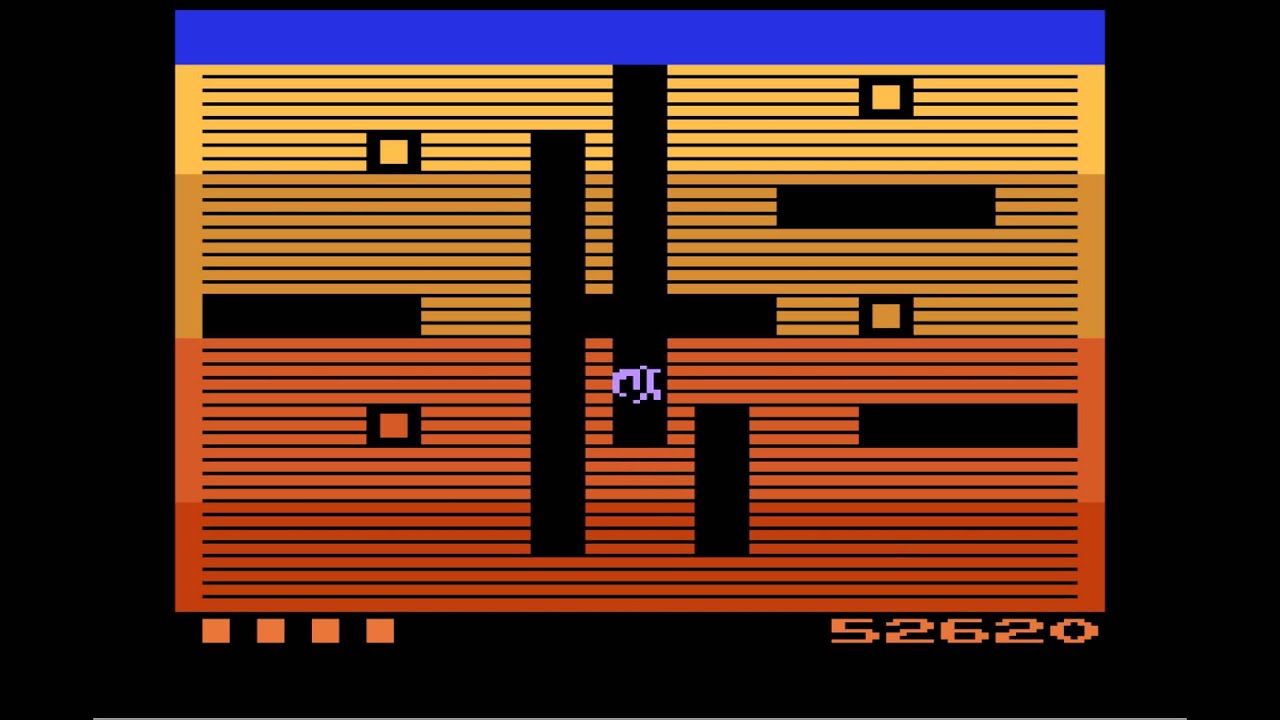 Another arcade smash hit that came to the Atari 2600, Dig Dug is a simple game that can literally drain away hours of your life. Dig Dug puts you in the shoes of a gardener tasked with clearing the land of all obstacles. Using a air pump that makes corridors through the earth, Dig Dug tunnels down to enemies and uses objects like rocks to finish them off. Notable for its arcade gameplay, the Atari 2600 version of Dig Dug is vastly different from other versions in the graphics department. Much like how different the arcade Pac Man is from the Atari 2600 version of the same game, Dig Dug is the arcade in spirit but not absolute practice. This is the game that changed Japan and for the better. Space Invaders by Taito was a sensation in the Japanese arcades and continues to be an iconic touchstone to this day. Like most games on this list the gameplay premise is simple: Stop the invading hordes of aliens as they advance upon your ship. Moving line by line from left to right and in reverse, the aliens of Space Invaders are a slowly cascading wave of baddies ready to be taken out by your blaster. You scroll your ship from left to right at the bottom of the screen to avoid the incoming projectiles from the aliens and that’s about it for strategy. The 2600 version of the game retains the arcade gameplay but sacrifices its bright and colorful graphics. And that’s a shame – the graphics for Space Invaders are quite iconic. Still, you get the basic outline of each character, even if they are sans color, and the heart of the game is largely intact. At the end of the day that’s all that really matters, right? 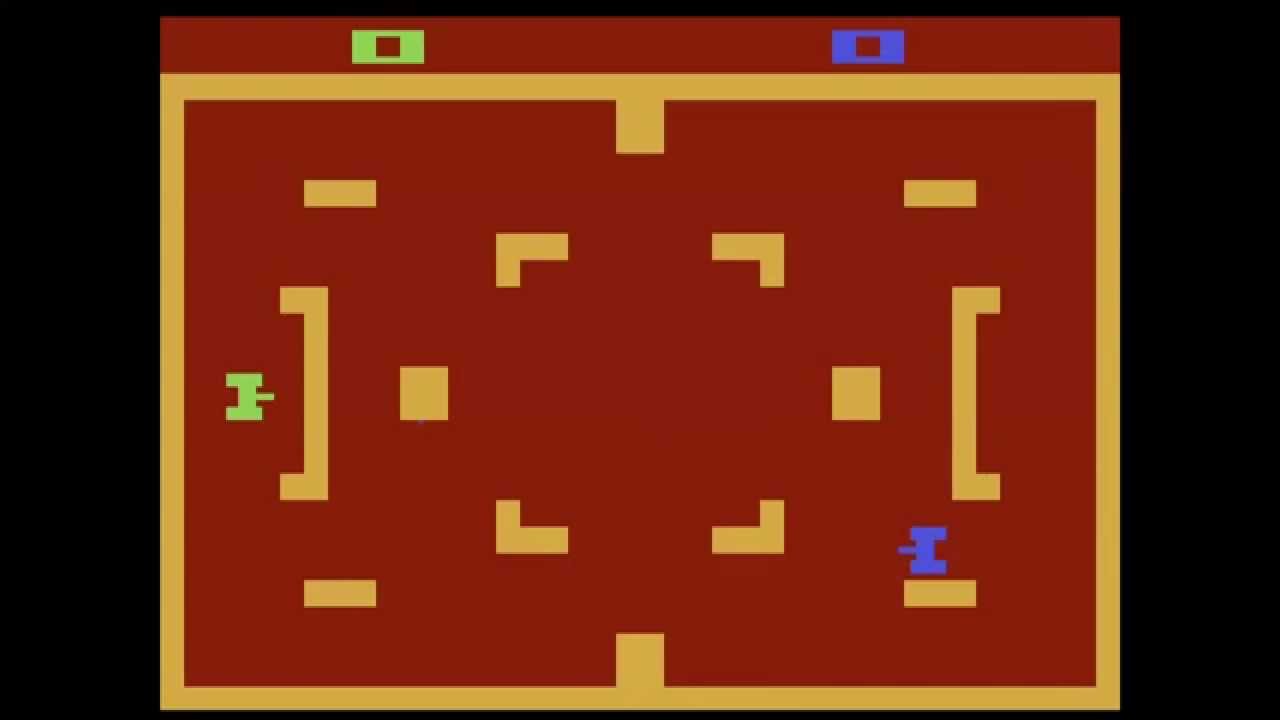 So you’re probably not expecting to see another PONG clone in the top 10 without first encountering PONG itself but Combat is worthy of its spot in every way. A little explanation: PONG was huge in the nascent days of home video game consoles. It was the reason many people ran out to the store to buy a system. Heck, there were even entire machines that did not but play some variation of a PONG clone or PONG itself. Like DOOM, calling something a PONG clone is not an insult, but rather a shorthand description for the kind of unique gameplay the game innovated upon and introduced to the world. Combat is another one of these games. Again, two players are placed in an arena and tasked with eliminating their opponent by bouncing a projectile between the two of them. One of the more iconic modes involves tanks in an arena. Modern gamers will find hints of Mario Kart’s battle mode in this game and, indeed, Combat is illustrative of how even the slightest derivations from a tried formula can provide the basis for a classic game. 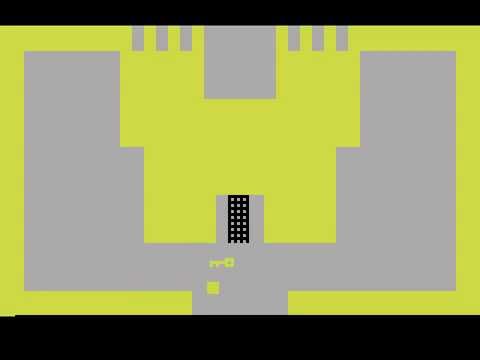 One theme you may notice running through the titles of games for the Atari 2600 is how simple and basic they are. That’s probably one of the advantages of being a pioneer, you can just label games for what they offer. In the case of Adventure, this is probably one of the first RPG-type games on a home console and any RPG type of game outside of the PC’s healthy scene. In this game the player moves through various screens trying to return a chalice to a golden castle. The rooms contain keys that unlock other rooms as well as monsters that pose a threat to the player. While very primitive by today’s standards, it has hints of what modern gamers would call “Dark Souls” type gameplay. For example, if the player encounters one of the dragons, it is almost assured death (much like in Dark Souls). Revolutionary for its time, Adventure is a classic for the Atari 2600 that fans of action-adventure games and RPGs don’t want to miss. 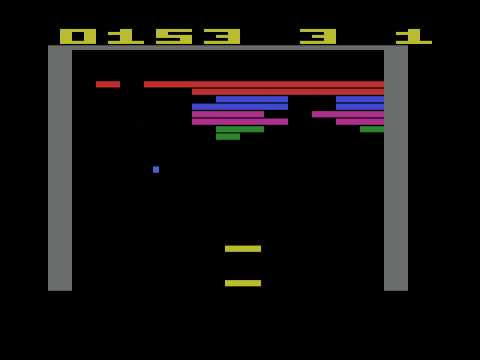 Like Breakout, only better! Breakout was a super colorful game that took the concept of PONG and got rid of the competitor. Instead you chip away at a rainbow cascade of bricks arrayed at the top of the screen until each brick is gone. Super simple gameplay concept and almost every gamer has played some variant of this during the course of his or her lifetime. The game gets faster and more challenging as it progresses but really sticks to its guns in terms of simplicity. The thing that is so amazing when you review the best of the 2600 is how simple so many of the games were and how timeless they are in hindsight because of this.

Missile Command is probably the most quintessentially 1980s video game of the lot. As a commander in charge with defending cities and bases from an oncoming ICBM attack, Missile Command on the Atari 2600 reduces the action found in the arcade version but still provides a comparable and engaging experience. The two biggest things Missile Command has going for it are great gameplay and iconic sound. Along with Pac Man, Missile Command is often immediately associated with the Atari era of gaming, and for good reason. Few games capture the zeitgeist of the early home console age like Missile Command and, with its combination of addictive gameplay and simple execution, the game remains one of the best ever made for any system.

Probably one of the most immediately recognizable titles on this list for old school gamers is Pitfall, the title largely credited with birthing the platformer and modern console titles as we know them now. The gamer has 20 minutes to complete the level, all the while avoiding traps and obstacles strewn throughout the landscape. Activision even award gamers who achieved a score of 20,000 or higher with a patch! Now that’s an in-game reward if ever there was one. Featuring big, detailed graphics for the 2600, Pitfall was the must-own game for the system and probably the most modern of the whole lot.