You may be asking yourself “What is the ColecoVision?” or, if you’re an old school gamer, you may already know about the classic home console from Coleco Industries that brought some of the best of the arcade right to your home screen.

A victim of the video game hardware crash of the early 1980s, ColecoVision was initially slated to compete with Atari’s ubiquitous 2600 and features technology that is comparable with that system. One interesting feature of the ColecoVision that is more common to modern consoles is that it featured the ability to upgrade the basic system.

This would all be for naught, however, as the system died less than three years after its release in 1982. The year 1985 was a difficult one for video games in general and it wouldn’t be until the explosion of the Famicom that the industry would fully recover.

One interesting feature of the ColecoVision’s library of games is that it is one of the few home consoles to feature games from both Sega and Nintendo. For those video game history buffs out there, Sega and Nintendo would later go on to become the de facto rulers of the industry, with Sega providing a challenge to Nintendo’s dominance later in the 1980s with the release of the Mega Drive 16-bit system.

Have you ever wanted to be Bob from Bob’s Burgers or simulate what it must be like on the assembly line at your local fast food joint? Burger Time has got you covered. In this arcade smash hit players assemble beefy patties all while avoiding food-themed enemies in a game that is a combination of Donkey Kong and Tetris. Burger Time was an arcade hit and translates over to the ColecoVision without missing a beat. One of the system’s main strengths was its ability to port arcade titles to the home television, and Burger Time is front-and-center on that list. While by no means an obscure arcade game, Burger Time doesn’t get nearly the love it deserves. 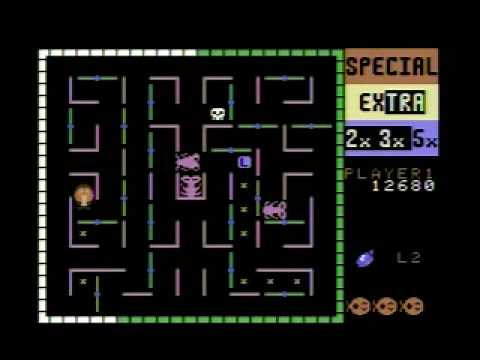 It’s hard to quantify the Pac Man craze that swept video games in the 1980s but let’s just say its takeover was total and complete by the time the ColecoVision was released in 1982. Namco’s Pac Man introduced an amazingly simple conceit that is still effective to this day: Run around a maze, avoid enemies, eat power pellets, gain points, repeat ad infinitum. Lady Bug is in this vein of games and features many of the same mechanics. Being a Pac Man clone doesn’t relegate this title to second tier status, however, as Lady Bug provides just as much challenge as the inspiration title and does it all with cheerful, bright graphics that are unique. Run and gun all from your super car – this arcade title is the 1980s distilled into an action game. Marrying the gameplay style of a shoot ‘em up with the racing elements found in Atari racers, Spy Hunter doesn’t try to do a whole lot but what it does it does exceptionally well. Again, a very arcade-inspired title, Spy Hunter shows the ColecoVision’s prowess for handling fast paced graphics and sound. A shame the system didn’t succeed, really, given its incomparable ability to bring arcade smash hits to the home. Spy Hunter isn’t the deepest game but it is immediately accessible and, like most other titles on this list, is easy to learn but tough to master. 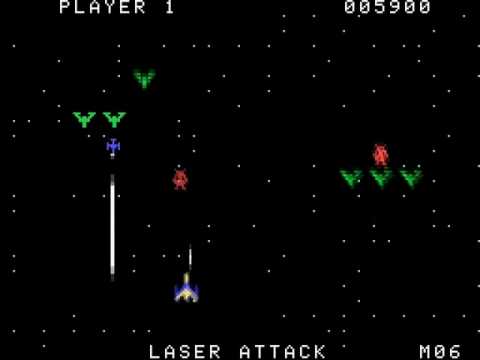 Another title that took an arcade craze an added a twist to it, Gorf is, in many respects, a Space Invaders clone but, again, should be considered on the innovations it added to the genre. Unlike Space Invaders, wherein the ship fires a shot and has to wait until it hits a target or leaves the screen, Gorf allows the player to fire multiple shots, the caveat being that the first shot disappears upon the second shot’s firing. This adds a twist to the strategy many gamers may choose to employ in clearing the screen. An interesting factoid about the game Gorf is that it was originally intended as a tie-in game for the motion picture Star Trek but the game’s designers realized it wouldn’t work out after reading the movie’s script. This explains why the starship featured in the game resembles the Enterprise. 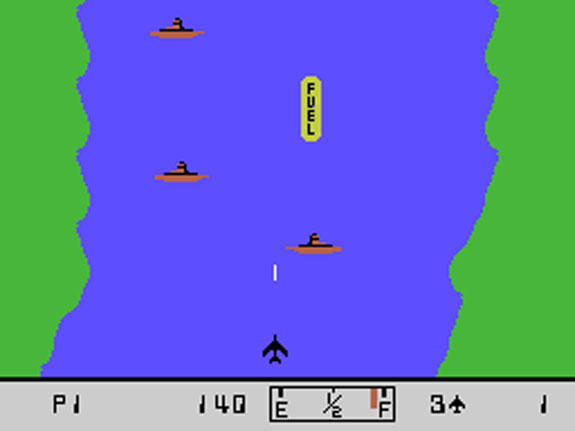 Another top-down shooter, this time set on river, River Raid gives players control of a craft that can move left or right but not up or down in a style more reminiscent of Space Invaders than Gorf. River Raid is impressive from a technical perspective in that the game is able to offer so much content on such a relatively constrained system. It does this through a procedural algorithm – a phrase familiar to any fan of open-world games – and really pushes the system using all of its available resources to deliver an outstanding experience. 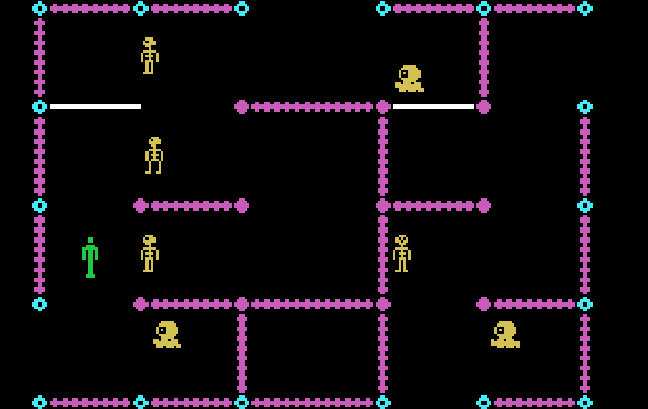 This title has not aged as well as some of the others but, again, is the quintessential arcade experience you expect from the ColecoVision. In Frenzy, originally titled Berzerk in the arcades, you go around shooting robots and that’s about the sum of it all. The graphics are primitive and the sound is nothing to write home about, but the gameplay really shines. This game might be a title best suited for the indie geeks that keep Steam’s home brew community alive but might be alienating for some modern gamers because it is quite archaic in many respects. Given that, gamers looking for an old school challenge will find plenty to love with Frenzy, a game that never lets up and remains challenging all the way through like a true money-devouring arcade game should.

Inspired by the 1983 movie of the same name, War Games is basically missile command with a few twists. If you don’t remember Missile Command, it’s basically a game in which you defend cities from nuclear attack. War Games is a similar conceit but with a twist: The player is rewarded for holding off a counter strike rather than being in the midst of one. If a certain Defcon levels goes beyond a specific point, a counterstrike is initiated and global nuclear war ensures – and the player loses the game. A little bit slower than Missile Command, but also just as strategic, War Games is a Cold War relic that shows its age and wears its inspiration proudly. 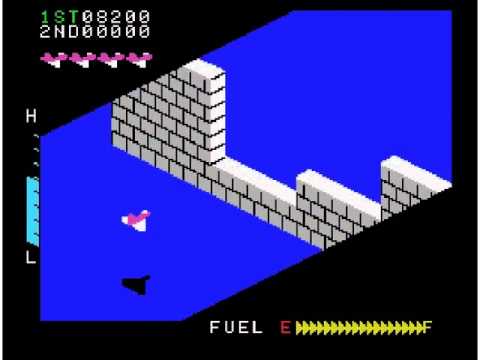 Zaxxon is everything you’d want in a shooter and then some more. Bold graphics, amazing design, and challenging gameplay are just a few things you get with this title from Sega. Not all ColecoVision games were perfect arcade ports, but Zaxxon goes beyond the arcade and is a true home console experience. Signaling the later shift towards the home screen and away from the arcade venue, ColecoVision’s Zaxxon capitalizes on the need for a deeper experience on home consoles without sacrificing the addictive gameplay that makes shooters so addictive. Again, Zaxxon is another title that shows the ColecoVision’s life was cut short too soon and it remains as a testament to a system’s greatness that could have been. 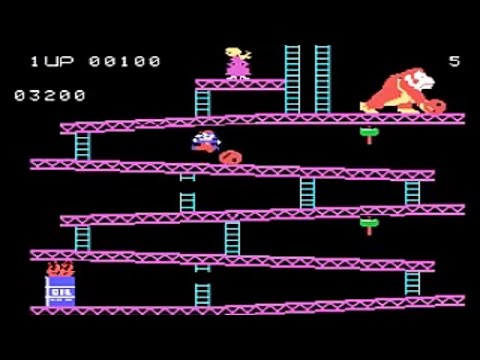 Donkey Kong was an amazing arcade title that introduced the world to both Mario and Donkey Kong, but in a way quite different than now. These two antagonists fought each other in stage after stage that combined side scrolling action and puzzle platforming. An arcade blockbuster for Nintendo, Donkey Kong’s port to ColecoVision was in-keeping with the home console’s tradition of bringing home arcade titles. A system seller in its own right, Donkey Kong is also the game that signaled to the world the powerhouse that Nintendo would later become. 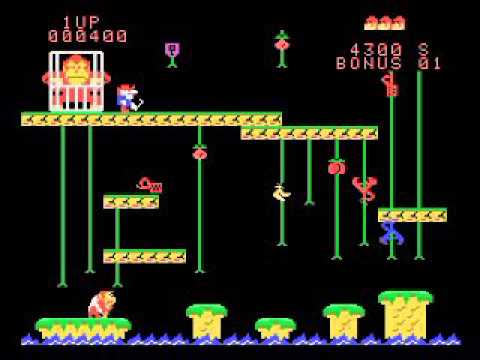 While not as famous as his dad, Donkey Kong Jr. nonetheless delivers a bit of a superior gaming experience on the ColecoVision. This game changes the Donkey Kong formula up by placing you in control of the titular kong and tasking you with a variety of puzzle/action-oriented tasks that variate quite strongly from the other game. Really Donkey Kong Jr. is its own thing but it is always evaluated in light of its predecessor, and that’s fair, but really Donkey Kong Jr. innovates a lot. Taking elements found in Burger Time, Donkey Kong, and even the Mario Bros. arcade titles, Donkey Kong Jr. is the perfect combination of bright graphics, solid gameplay, and iterative design. It mimics the arcade flawlessly and delivers an incomparable experience. A must-have title for the ColecoVision, it is also the system’s most popular by far.