The competition between the Sega Mega Drive and the SNES was a true matchup of the titans. Luckily for Sega, one ace card it had up its sleeve was its massive portfolio of arcade properties, many of which were racing games. But bringing an arcade racer to the home console was often easier said than done and that’s why Sega’s impressive turnout in this regard continues to impress.

From the classic OutRun series to the bleeding-edge tech of Virtua Racing, Sega knew their market and they exploited it to the best of their abilities. One thing that Sega racers did that others often struggled with in the final product is a sensation of speed combined with rock-solid gameplay.

This list of Mega Drive games contains a smattering of both arcade and console-only games but the core thing that ties them all together is that they offer truly remarkable racing experiences on the system. Here are our top 10 racing games on the Sega Mega Drive:

Take what makes OutRun great and streamline it into an experience that is akin to a racing game on tracks. Think of it like a rollercoaster racing game or something along those lines because it is equally as intense. Initially released as an upgrade for the original OutRun arcade cabinet, Turbo OutRun was eventually ported to the Mega Drive. The game offers players the choice of an automatic or two-speed manual transmission for their car, another change from the first game, as well as one of three power ups after passing through a checkpoint. While not a lot distinguishes it from OutRun outside of a few changed mechanics here and there, the subtle changes make major differences in the feel of the game. Each offers its own vibe and is a throwback to that old arcade spirit even on the Mega Drive. You have one of three Lotus cars to select from in a racing game that pumps the first title full of steroids. While the first Lotus game seemed spartan when it came to what you could do, the sequel is absolutely brimming with options. Not only that but it adds music to the game as well as three different difficulty settings. There are two game modes, a time attack mode and a championship mode, with the courses a little bit shorter but more varied this time around. Everything about this game is geared towards speed and its stripped down, purpose-driven setup emphasises this. So what does the RECS part of the name mean? It is basically the game’s version of a track builder – and it is pretty glorious. Stuff like this was unheard of in the 16-bit era but here we have it. More a sum of its parts than excelling in any single area, Lotus 2 is a great throwback to a pure arcade racer. 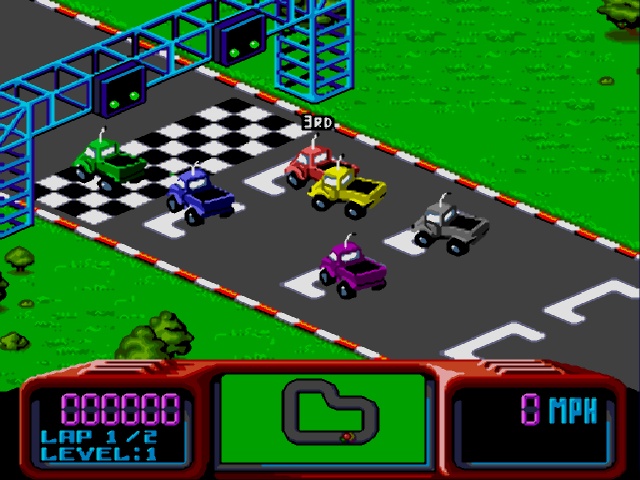 Rare’s remake of RC Pro-Am for the Nintendo, this track racing game involves guiding your dune buggy-esque vehicle around a track and beating your opponents. Played from an omniscient third-person viewpoint, you see everything around you in a perspective that is almost like a prototype of Mario Kart. In that vein, you collect power ups and weapons to help you along in the game and the basic challenge lies more in mastering the gameplay mechanics but without the flash and arcade-style speed of other racers on this list. A great game that makes you feel like you are playing with toy cars, Championship Pro-Am is the definition of old school.

Your goal in this arcade-inspired racer is to win the Drivers World Championship. There are three primary racing modes to choose from including Senna GP, world championship, and beginner mode. In the first mode you get to select a track to race on as well as a transmission style including automatic, manual, and a manual with a gearbox option. Beginner mode lets you practice before you race and then leads into the master mode which gives you a range of racing options and challenges. All in all, this game gets points for attempting to bring options and simulation to the racing genre. It might appear to be just your typical arcade racer upon first glance, but once you dig deeper you quickly realize how much this title has to offer. 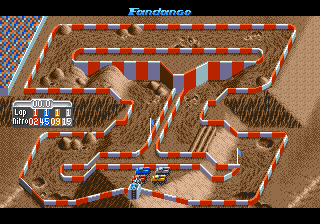 Another track racer, Super Off Road is a dirt racer from a third-person omniscient viewpoint that offers simple gameplay mechanics that is amazingly fun and compelling in action. You compete against other players or the computer in various tracks of ever-increasing difficulty with hills and valleys that make driving in a straight line a challenge. There are power ups and everything you would expect from an arcade racer but it isn’t terribly over the top or ridiculous. It’s a pure challenge and that is what makes it so fun and one of the best on the Mega Drive. 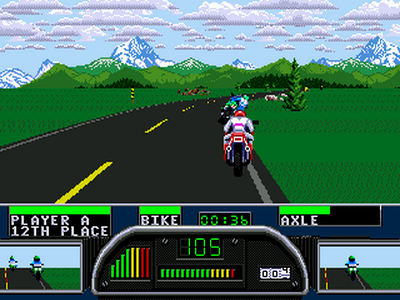 This is something a little bit different from the other entries on this list: A motorcycle racing game. Road Rash 2 is largely the first game amped up on some steroids and with new stuff thrown in for good measure. It is largely inspired by games like OutRun in that it features blazing fast speeds and really cool tracks but the central conceit of Road Rash 2 is the motorcycle-to-motorcycle combat that makes it a biker brawler on top of being a racer. If you like games with vehicular combat but you want that to be realistic, Road Rash 2 has your number. It was also one of those original “controversy” games in the video game world because some people thought it inspired violence though, as anyone that has played it will tell you, the only thing about it that inspires violence is its difficulty at points. 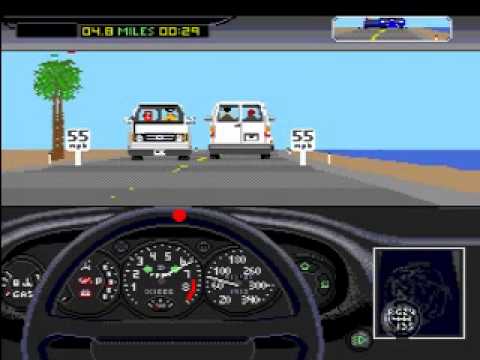 Need for Speed owes a lot to The Duel, the original police chase racing game. You need to make it to the next gas station checkpoint without getting destroyed or running out of gas and you can expect a police escort on each and every leg of the race. This game improved upon the first installment with better graphics, more variety in where you raced, and in the option to race against computer controlled opponents. If the prospect of test driving exotic cars and running away from the law inspires you then The Duel: Test Drive 2 is a classic you might want to give a look. 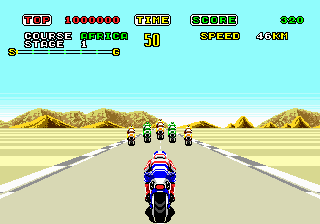 Race around the world on a super-fast motorcycle in one of Sega AM2’s masterpieces of the arcade and Mega Drive. Inspired by OutRun but using motorcycles, Super Hang-On emphasizes speed above all else and this makes it an intense experience. This is because a lot of the game is avoiding obstacles and staying on a blazing fast roller coaster from hell without incident. When you add competition with other racers into this mix, you get a game that is absolute madness. In many ways it presages games like F-Zero on the Super Famicom to give you some idea of how it feels in spirit and vibe. 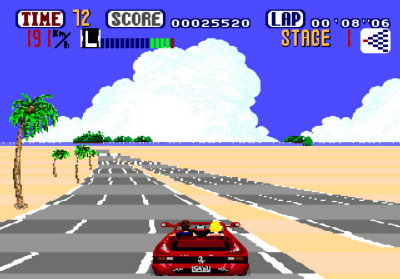 OutRun was one of those arcade spectacles that drew in crowds by sheer force of its awesome looking cabinet. On the home consoles, however, OutRun largely works because of its simple gameplay mechanics and blazing fast speed. Racing exotic cars? Check. Tons of different locations? Check. Arcade game mechanics? Of course. OutRun had the unenviable task of taking a large, experience-driven arcade game and shrinking it down to something palatable and workable on home consoles. The Mega Drive version succeeds and in ways that you might not expect. When Sega promised that the Genesis could do arcade perfect games, this is what they were talking about. 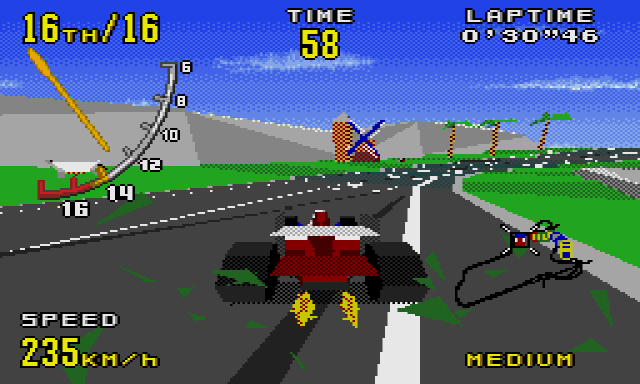 When a system does things that no one thought it could, people are impressed. Sure, Virtua Racing had help from some extra chips and hardware built into the cartridge, still the largest cart ever made for the Mega Drive, but it is all worth it in the end. Retailing for a lot more than your standard Mega Drive game, Virtua Racing is the arcade game at home…more or less. Virtua Racing is like the precursor for Ridge Racer and everything that came after it. While it looks like an abstract art experiment today, it was cutting edge back when it was released. Porting this to the Mega Drive was no joke and really showed how innovative companies can be when push comes to shove. Too bad we didn’t get more of that on the Mega Drive but something tells us the extra-expensive cart price had something to do with that.