The Commodore 64 was one of the most successful consumer PCs and video game consoles ever released to the market. Debuting at the 1982 Consumer Electronics Show in Las Vegas, the Commodore 64 dominated the low-end personal computer market for much of its lifespan and it credited this market ubiquity with its sales channels, located mainly in retail stores frequented by families and mass-market consumers, instead of the more specialized electronics stores and direct-to-consumer methods preferred by many PC manufacturers at the time.

Many of the games within the Commodore 64’s library are ports from other properties, including the arcades. This means that you can likely find multiple versions of the games below available on different hardware. While each has their different strengths and weaknesses, where possible these descriptions will focus purely on the Commodore 64 port. That means some features discussed may either be entirely absent or mechanically different if you choose to play a version for another system.

Of course, with such mass market success the Commodore 64 spawned a slew of top-notch titles, many of which, sadly, fell under the radar. In this article we’re going to offer our selection of the ten top underrated video games for the Commodore 64. These titles were awesome bits of craft but that failed to capture the attention of a wider audience and, especially if you’re a Commodore 64 fan, are must-play games. 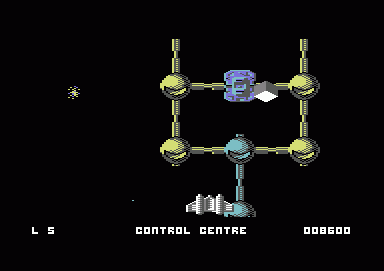 Released by Faster Than Light in 1986, this vertical shooter features five different levels and throws wave upon wave of enemies at you in a fast-paced game that is the essence of early 1980s arcade greatness. You’re a member of the Light Force, a squadron of fighters commissioned to protect a dominion of Earth (called Terra in this game) from an invading alien fleet. While the game achieved great commercial success in the United Kingdom, it faltered in other markets and went unnoticed despite its quality. Fast-paced action and excellent graphics for the time make Light Force a tour-de-force on the Commodore 64.

Released in 1986 for the Commodore 64, Spellbound originally debuted in 1985 for the ZX Spectrum and came from the acclaimed team of David Jones and composer Rob Hubbard. A platforming game with graphical adventure elements, Spellbound tasks the player with a quest to save his friend Gimbal the wizard. Unlock text-based adventures that require the player to input game commands, Spellbound works via a unique drop-down menu system that gives the player a variety of interaction options. Entering rooms in the castle drains energy and, once totally depleted, the “Magic Knight” avatar dies. One of the most immediate and pressing issues players will have to deal with is how to replenish energy in order to continue exploring. Further, there are some rooms in the castle that result in an instant death, keeping the player ever on their toes when it comes to what the game might throw at them. The player assumes the identity of a young man cursed with lycanthropy and seeks revenge against the members of an aristocratic English family that placed the curse on him. Delivered from a uniquely isometric perspective, the player character can move up, down, and left or right as he explores the city of London by day. Once the clock strikes midnight, you are transformed into the titular werewolf and set out on your quest to kill and, optionally, eat the members of the family that placed the curse on you. Pretty hardcore for a game released in 1987, the title’s original publisher ended up going bankrupt before its release thus it was put to market by beloved developer and publisher Mastertronic, the house that spawned a number of cult-classic titles for the Commodore 64. 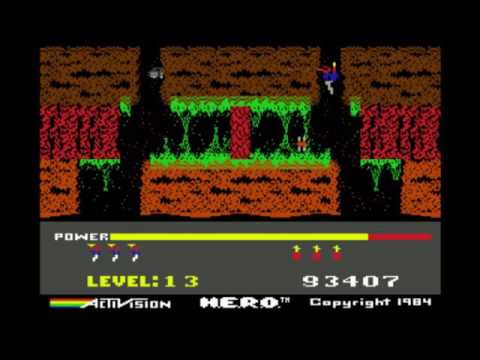 The acronym that is the title of this game stands for Helicopter Emergency Rescue Operation and is probably one of Activision’s most-beloved early games. Employing a helicopter backpack (later changed into a jetpack in Sega’s iteration of the title), the player assumes the role of a spelunking and gravity-defying hero who is placed in a variety of environments out of which he must rescue trapped miners. There are all manner of obstacles placed in front of the title character, our hero R. Hero, including cave-ins and flowing lava as well as spiders, bats, and other creatures. Points are doled out for clearing cave-ins with dynamite and eliminating creatures, with the most points being awarded for rescuing one of the trapped miners, of course. 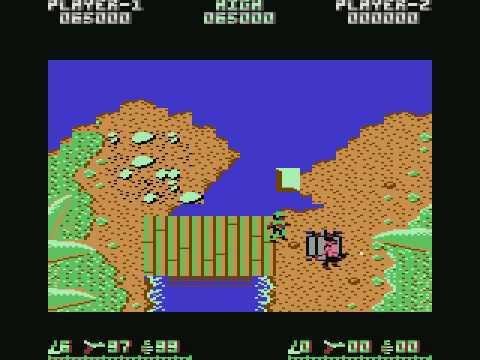 A vertically scrolling run and gun shoot ‘em up game from the same house that later brought the world the Neo Geo, SNK’s Ikari Warriors was inspired by the Sylvester Stallone Rambo films of the 1980s and was followed by SNK’s famed Metal Slug series at least in spirit. The characters from Ikari Warriors have made appearances in a variety of SNK titles since their debut from the aforementioned Metal Slug to the King of Fighters fighting games. As commandos Ralf and Clark, the player sets out to mow down any and all opposing troops on the way to the village of Ikari. Among its innovations include the ability to play cooperatively as well as use in-game vehicles 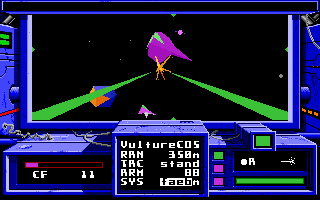 Combining a space combat simulator with an RPG game, Space Rogue is often considered by many critics to be a predecessor, at least in spirit, to the popular Wing Commander series that Space Rogue creator Paul Neurath would eventually develop. Often cited as the first flight simulator to take on the science fiction/space flight subgenre, Space Rogue originally aspired to be “Ultima in Space” or an intensely RPG-focused affair. The final product, however, combined elements of multiple genres in  a pastiche that is still cited by game developers today. 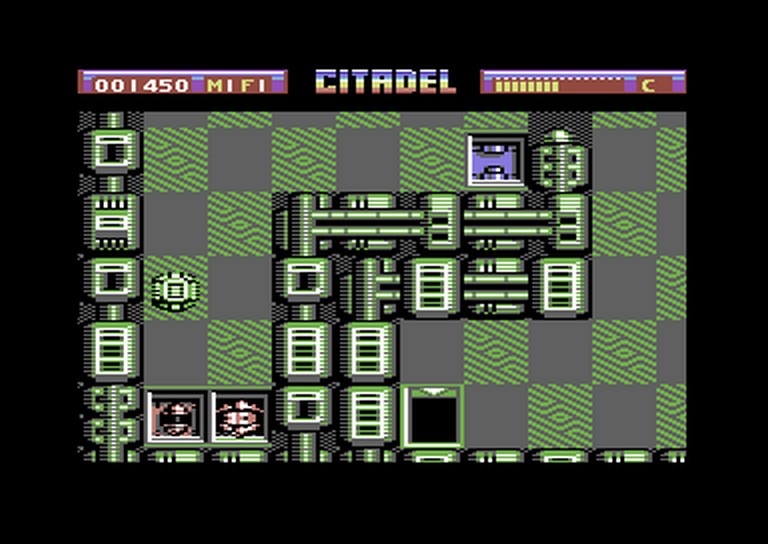 A much more slow-paced shooter than others on this list, Citadel emphasizes the element of strategy over fast reflexes for an experience that is wholly unique on the Commodore 64. It opens with your arrival on what was thought to be an uninhabited planet, but the discovery of an underground city complex has upended that notion entirely. Now, tasked with exploring the planet, you simultaneously have to avoid its automatic defense systems which activate upon your arrival. Viewed from a top-down perspective, your ship, Monitor, can fire back and even dispatch probes to retrieve items. Probes can also be used for a variety of other tasks such as protecting your ship and preventing pincer movements by the enemy. An almost forgotten title, Citadel is one of the more adventurous games in its blending of exploration and shooter elements. Another horizontal shooter, players control a droid named Gilby as he sails over the surface of the planet Iridis Alpha. One thing that Iridis Alpha has that separates it from other shooters is its split screen action and the ability of the player to maneuver in a variety of ways not seen in other games of this type. For one, you can gain energy for your ship by shooting an enemy and you can lose it for colliding with one. You gain extra lives by landing on the planet’s terrestrial surface and delivering energy back to it in what is one of the more bizarre game mechanics of any era. The game also breaks up the exploration of the game’s stages with bonus sections. 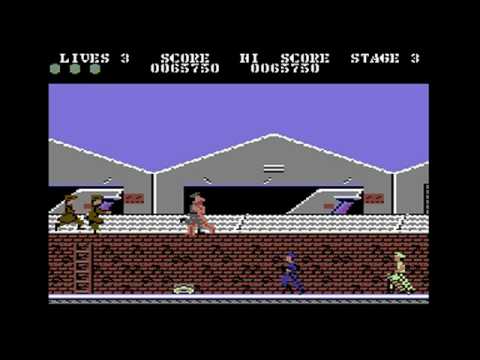 Based on an arcade game from Irem and Konami, the player assumes the role of an American soldier on a mission to free prisoners of war trapped in a variety of locales, called Missile, Harbor, Bridge, and Prison Camp within the game, respectively, the game emphasizes constantly pushing forward and punishes players if they remain idle for too long, sending a bomber to clear them out of the area. Graphics are impressive for the day with large detailed sprites and variety in composition that conveys the changing scenery as you pass through levels. A simple arcade sound and music composition also round out this game which was also known as Rush’N’Attack in the United States.

As the pilot of a Sopwith Camel biplane fighting in World War I, gamers are tasked with shooting down enemy fighters and dropping bombs on targets below as the landscape scrolls underneath them. Named after the medal Pour le Mérite, aka the “Blue Max,” this game is skimpy on the options and high on the difficulty meter. Its graphics, plain and understated by modern standards, nonetheless do the trick. Where this game really shines is in its addictive and increasingly challenging gameplay. Who would have thought such a simple concept could be so thrilling? Indeed, unlike the Space Invaders and other shooters of the era, Blue Max’s decision to use a historical time period in which air combat was nascent not only gives them a lot of wiggle room to play around with genre expectations but also gives them some license to do something a little different. Managing the duel tasks of fighting oncoming enemies and bombing the surface proves a challenge for even the most dexterous gamer.