Launched by Sinclair Research in 1982, the ZX Spectrum 8-bit home computer is fondly remembered by legions of fans for its huge library of video games. Initially conceived as a it do-it-all device for the home and specifically those homes that had not yet embraced the computer revolution, the ZX Spectrum also had productivity software and other applications developed for it as well though we will focus on the video game library in this article. We’ve talked in the past about the 10 top games for the ZX Spectrum, and there are no surprises there, but in this article we’d like to discuss the 10 top underrated games for the Sinclair Research ZX Spectrum.

This list is not in any particular order but instead just represents a list of what we thought were some games that people would want to check out today. One thing you notice when you peruse the ZX Spectrum’s library is just how many simple, though great, titles there are. We tried our best to avoid those games in this top 10 list simply because there are a ton of them and most of their concepts exist in other games. In short, while those games are good, they’re quite derivative and simple – probably not the best material for this list.

And without further ado, here are the 10 top underrated games for the ZX Spectrum that you should check out if you get an opportunity. 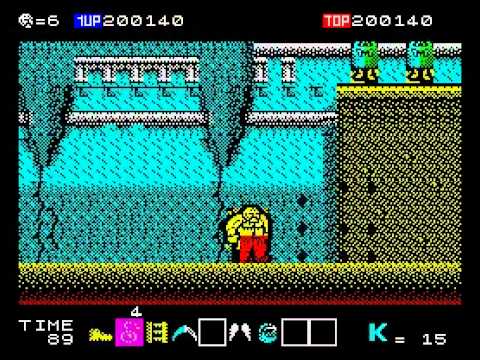 This 1987 platform title from Data East saw an iteration on nearly every possible video game platform around at the time, including the ZX Spectrum. As Jinborov Karnovski, players shoot fireballs, dodge enemies, and generally do things you’d typically find in a Super Mario Bros. game except for in the world of Karnov which itself is a blend of Soviet Central Asia and high European fantasy. Though both the arcade and home ports were noted for their difficulty, many gamers remember the home versions as being distinctly more difficult than the arcade counterpart. Solid platforming mixed with a steep difficulty curve made Karnov fun but challenging, particularly on the ZX Spectrum where the system’s limited color palette sometimes struggled to render the game in a way that was intelligible. That said, Karnov is easily one of the best games on the ZX Spectrum and we can’t sing its praises enough. It really pushes the system and shows off what it can do as an 8-bit device. If not for the limited colors, the ZX Spectrum version of Karnov would probably be in the race for one of the best ports available for the game. 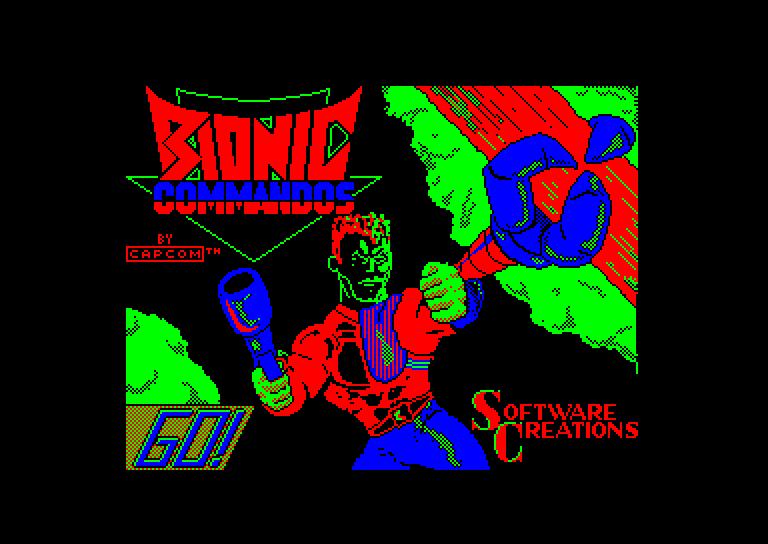 You may remember this game from the NES classic by Capcom but you may be entirely unaware that the ZX Spectrum got its own version of this awesome game and it is not only a great version but also probably one of the best action platforming games on the ZX Spectrum. What do we say about Bionic Commando that hasn’t been said before? As a commando with a grappling hook for an arm, you swing and battle your way through stages with military themes and enemies. There is a bit of story behind it all, too, with the version of the story differing depending on the region where the game is released. This is because of the inclusion of one infamous dictator from World War II which was deemed unacceptable by some countries. Overall Bionic Commando is one of the best of the 8-bit generation, the ZX Spectrum being no exception to this rule. 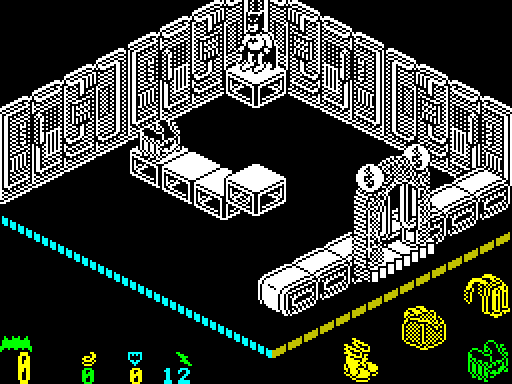 Published by Data East for the ZX Spectrum, this iteration of the Batman video game based on the movie followed a different path from Data East’s other popular Batman effort, the NES version, and instead focuses on crime solving and adventure elements more akin to a procedural novel than an action platformer. Of course, there are heavy action elements, but everything has a unique presentation that makes it more akin to a comic book narrative than a set-based action platformer. This style would later be used to great effect in the Sega Genesis Game Comix Zone. Again, the only thing holding back the ZX Spectrum port are the graphics and the limited color palette but otherwise it’s an excellent title. 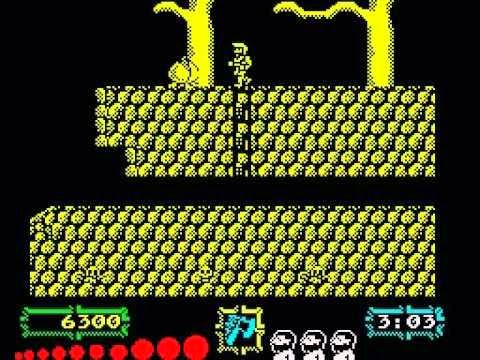 There’s a version of this game for nearly every video game platform you can think of and then probably a few you can’t think of or never heard about in the first place. Just like in the other versions of Ghouls ‘N Ghosts, you play as a knight on a quest to save the princess from the demon horde led by Satan. Bone-crushingly difficult, Ghouls ‘N Ghosts is not for the faint of heart or those that are easily frustrated. Again, like most games on the ZX Spectrum, the color palette is completely different from the other versions of the game and last we checked there’s no music. But in terms of games on the ZX Spectrum worth your time? Ghouls ‘N Ghosts definitely makes that list. 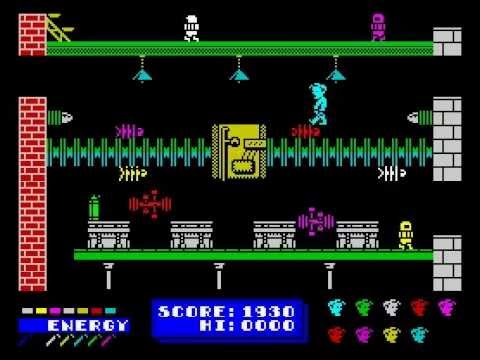 Released by Mirrorsoft in 1985 for the ZX Spectrum, Dynamite Dan is a platforming game similar to Jet-Set Willy, one of the most popular games at the time, and involves collecting sticks of dynamite in a stage to pen up a safe to obtain the evil doctor’s plans for Earth. And that’s basically it. Basically featuring one gigantic stage, Dynamite Dan is subjected to the normal range of pitfalls (see what we did there?) that a platforming hero is subjected to just within one stage. There was a sequel to the game that featured multiple stages and tons of rooms in each but it is hard to beat the original, a true classic to this day. 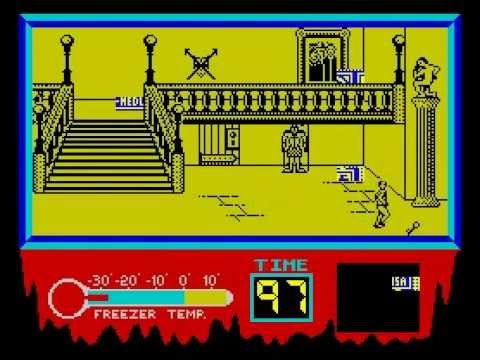 Developed and published by CRL Group and based on the musical of the same name, The Rocky Horror Show video game gives you the choice of controlling Brad or Janet in an adventure game that recreates the atmosphere of the musical for the ZX Spectrum. Reminiscent of titles like Maniac Mansion, the game involves solving puzzles and moving the narrative along. Sporting some of the most colorful graphics on the ZX Spectrum, The Rocky Horror Show also doesn’t skimp in the audio department with a soundtrack that, while grating, really imbues it with some atmosphere in the beginning. Not a phenomenal game by any stretch, it is a lesser known, certainly underrated, title for the ZX Spectrum. While there are versions available for other systems the ZX Spectrum does have a certain minimalist charm about it. With seven levels each made up of just one street, Travel with Trashman, part of a planned trilogy, involves the simple act of collecting rubbish from each house’s bin as you move along a line. Of course there are things like a time limit and an ever increasing difficulty curve to keep things interesting but the premise is ultimately quite simple. That doesn’t mean it isn’t fun, and Travel with Trashman keeps it fun and light with some really witty in-game humor that takes a meta perspective with regard to the whole game’s premise, poking fun at it and the player while staying away from sounding cynical. 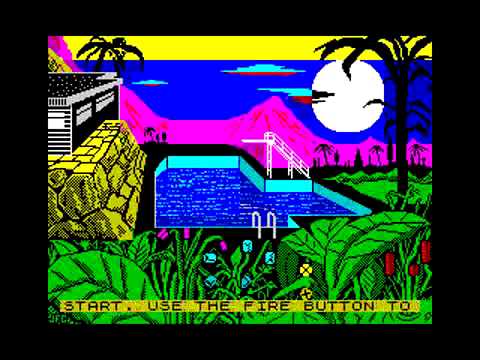 Released in 1985 by Firebird Software in the UK, Thunderbirds is ostensibly a maze game somewhat like Pac Man in that you have an avatar and avoid obstacles but also akin to platformer Pitfall in that there is an exploration element to the whole thing. Extremely primitive by today’s standards, Thunderbirds is best viewed as a study in innovative game design. While we haven’t commented on the music in most of the games on this list, the soundtrack to this game will make you want to take a knife to your ears so we advise you hit mute when playing this title.

If you want to play a solid tennis title on the ZX Spectrum then look no further than Match Point. This game is on this list because it is a solid sports title in an era when such games were often of middling quality, to say the least. While almost like a more advanced Pong clone at points, this game does have a enough “tennis” to it to warrant the association and the placement on this list.

1. My Name is Uncle Groucho, You Win a Fat Cigar 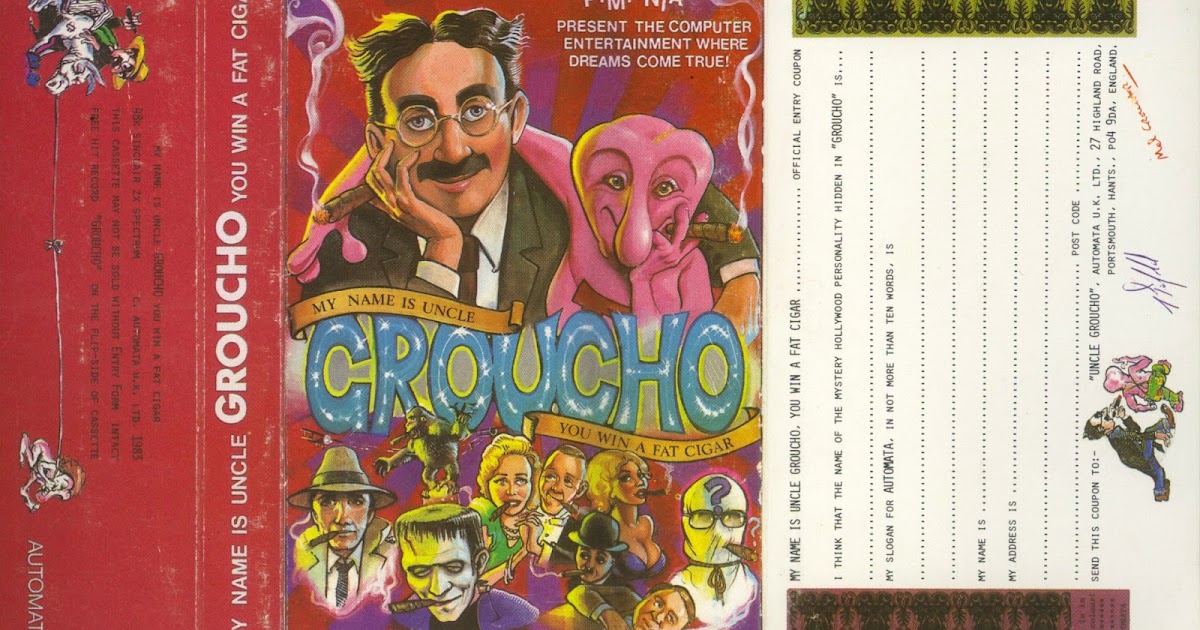 Even Groucho Marx got his own video game and it is a text-based adventure, naturally. Featuring his trademark humor and a variety of comedic situations to work your way through, this game is glorious in its primitive storytelling. While the title casts all sorts of spears of innuendo, the game itself is largely tongue-in-cheek humor and compelling narrative. We recommend checking this game out if you’re a fan of adventure titles on personal computers.