A look at the visual capabilities of three generations of Playstation… via one of the most visually compelling games of all time.

Shadow of the Colossus was first released on Playstation 2 in 2005. It followed an adventurer named Wander, who must travel across a forbidden land on horseback to defeat sixteen giant beings known as the Colossi. In return for doing so, he’ll be able to restore the life of a young woman. So far, so ordinary. But what made Shadow of the Colossus unique was that the short description above encompasses all you need to know about the game’s plot. There are no towns to explore, no puzzles to solve. No people to interact with, and no enemies to worry about along the way (aside from the Colossi, once you’ve found them).

So what did the developers spend all their time on, given the absence of so many game-play features you’d expect from an action adventure game? Well, for a start they made it staggeringly beautiful…

Shadow of the Colossus featured ultra-realistic horse mechanics, stunning minimalist landscapes and the opportunity to explore those landscapes endlessly on horseback. While the Colossi where the only enemies you had to worry about, they themselves were towering giants, inhabiting a range of unique and beautifully created environments. There wasn’t much to do in Shadow of the Colossus but ride through vast landscapes, but that was exactly the point. The award winning soundtrack made navigating the forbidden land even more appealing, while the graphics were as impressive in their execution as they were in their conception. 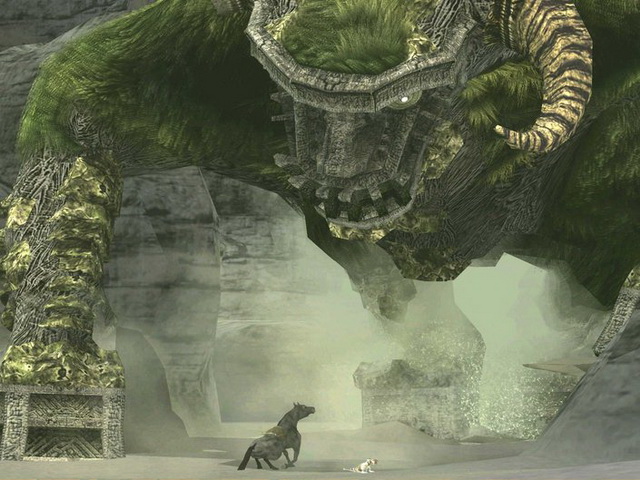 A subsequent version of Shadow of the Colossus was released on PS3. The atmospheric gameplay remained the same, while the graphics (unsurprisingly) built on the predecessor’s impressive start. Now that a version of this cult classic is coming to PS4 Pro, there’s arguably no better game to demonstrate the capabilities of the three machines – Playstation 2, Playsation 3 and Playsataion 4 Pro. Take a look at the video below to see how far we’ve come since 2005! Hint: Keep an eye on the grass!