The Top 10 Games for the Original Xbox

Released in 2001, the arrival of Microsoft to the console wars was as much of a surprised to Nintendo and Sony as it was the rest of us but, if you had paid close attention in the years prior, the signs that Microsoft was about to dive head first into the industry were there.

From standardizing its PC video game operations with the launch of DirectX to the partnership with Sega on the Dreamcast and Windows CE, Microsoft’s interest in the industry had grown since the days of Japan’s MSX and, after the Dreamcast’s untimely demise, it seemed like the perfect hour to join the fray. And it was, even if it did launch during the heyday of Sony’s most popular console, the PlayStation 2 (which also happens to be the most successful home console of all time.)

Though the original Xbox was unable to dethrone industry leader the PlayStation 2, the console nonetheless introduced the world to some now-classic series such as Halo and Fable. Rocking graphics unseen on rival consoles, the original Xbox was a beast of a machine and weighed so much it could have probably killed a small child if it had fallen on him.

Beloved by the modding clique today, the original Xbox married the style of PC gaming with the form factor of home consoles in a way that few devices have attempted since.

Naturally, the box would have been nothing without good software, and that’s something the original Xbox had a in droves. From mastery of first-person shooters to deep and involved role playing games, the best games for the original Xbox offer a little something for everyone.

Gamers who recall the popular Mech Warrior series of games will enjoy MechAssault. Basically the same concept just for consoles, MechAssault puts you in the pilot’s seat of a massive mech as you take on other mechs in combat. Unlike MechWarrior, a game that has its origins in the world of pen-and-paper gaming, MechAssault is a fast-paced, action-packed game that emphasizes speed and movement over tactics pacing. The real draw for MechAssault is its awesome gameplay and intense action but the title’s smooth graphics and excellent sound effects make it a blockbuster title.

Based on a PC title of the same name, Crimson Skies: High Road to Revenge takes the PC combat flight sim game to a whole new level in a title that is heavy on arcade action and light on moments where the player has nothing attacking them. Simulating the bipedal plane dog fights that characterized air combat in World War I, Crimson Skies also evokes Hollywood in its use of music to underline the action on screen. Featuring both single player and multiplayer combat, Crimson Skies was one of the first true sensations on the early Xbox Live service and is a cult classic among diehard Xbox fans to this day. 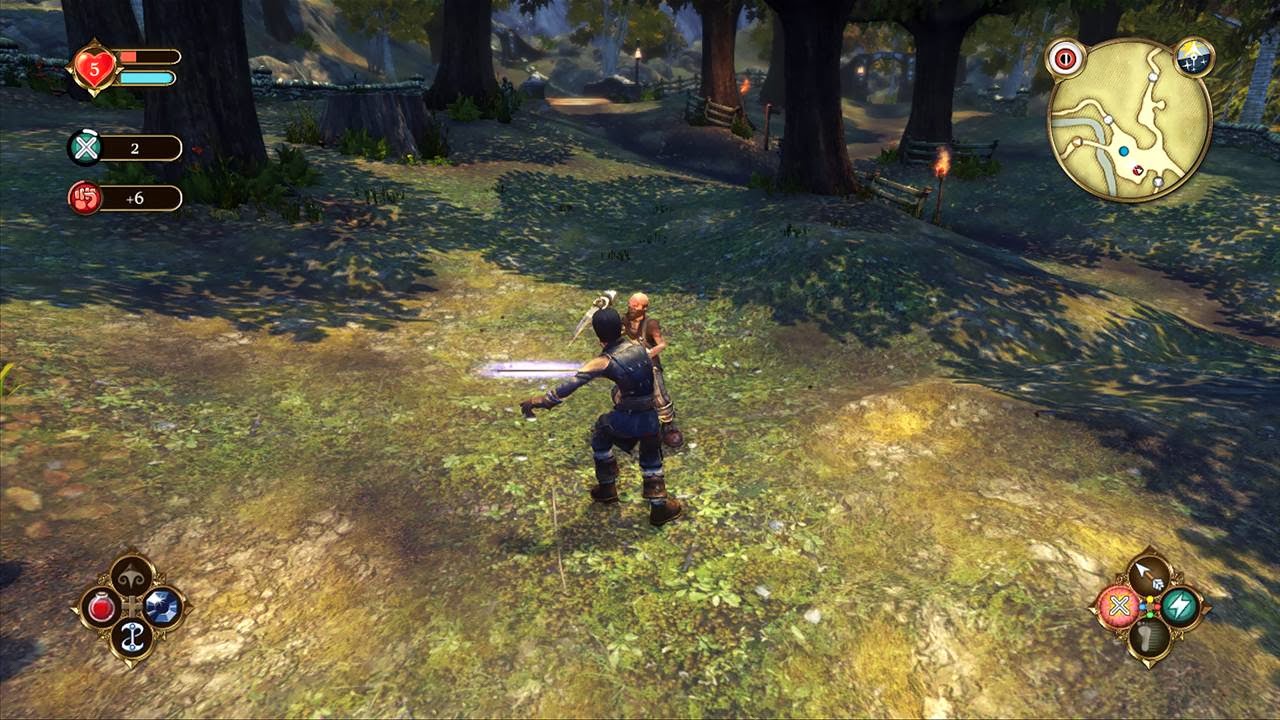 When it comes to role playing games on the original Xbox, outside of Morrowind, players were often struggling to find something to fill the void. Fable, a unique title from Microsoft themselves, was just the ticket for many gamers. Combining choose-your-own story elements with action role playing game styles of play, Fable went on to spawn sequels on the Xbox 360 that, like the first game, emphasized storytelling and creating your own “fable.” Though there are better games in the series now, the original Fable is the game that started it all and is a competent game even today.

6. The Chronicles of Riddick: Escape from Butcher Bay This is the rare film-derived video game that ended up doing better than the film upon which it was based. Not only is Escape from Butcher Bay an amazingly good game, but it eclipsed the film starring Vin Diesel and even went on to spawn its own sequel outside of the world of celluloid. Marrying the best of stealth action and narrative, The Chronicles of Riddick also shined at launch for its unparalleled ability to show off the Xbox’s graphical prowess. A beautifully crisp game even now, Escape from Butcher Bay was something that could only be done on the original Xbox and it showed. 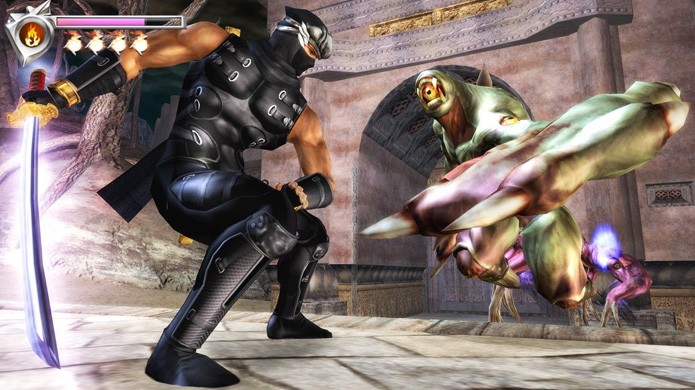 A re-imagination of the original NES title from yore, Ninja Gaiden on the Xbox has one central thing in common with its 8bit console forebear: Absolutely maddening difficulty. Of course that is balanced out with this title’s awesomely addictive action which borrows heavily from Tecmo’s Dead or Alive fighting game universe. But make no mistake, you will die often in this game and that might be a huge turn off for modern players. For those that stick around, however, the experience is one for the books as the game has fast, crisp graphics, airtight gameplay, and a bonkers narrative. In short, the game has all of the ingredients of a classic.

Probably one of the most famous exclusive titles on this list, Halo: Combat Evolved originally began its life as a game Bungie was developing for Macintosh computers. Work began on the game around the time Steve Jobs returned to Apple and the iconic pitchman even showed early footage of the game off at one point. And it’s a good thing he did because it attracted the attention of none other than Microsoft who was attempting to fill its stable with exclusive titles in anticipation of the Xbox’s launch. Little did Microsoft know but Halo would go on to become the company’s biggest franchise and a standard bearer for the console. Probably the single best role playing game on the Xbox, Star Wars: Knights of the Old Republic transports players back to the era of the Jedi and Sith as they battle for control of the Republic hundreds of years before Darth Vader was even a thought. Blending narrative choice and tight action gameplay, Star Wars: Knights of the Old Republic put particular emphasis on player choice in the narrative and made it feel like the gamer’s actions had true impact in the game’s world. Sporting a narrative plot line stronger than many of the films, the game’s world is overwhelming compelling and rich, offering something at every turn for fans of the Star Wars films.

If the original game was “Combat Evolved” then Halo 2 can be called “Combat Perfected” as this title is the definition of a perfect 10 in the first-person shooter genre. The campaign, the multiplayer, the graphics – all three came together for Halo 2, delivering a title to the gaming public in November 2004 that still holds a special place in the hearts of Halo fans across the globe. While the first game enjoyed relative success as a multiplayer game it also became quite specialized towards its later life with most pro gamers choosing to use the pistol rather than any other weapon. Halo 2 broadened the scope of viable weapons and took everything people love about the first game up several levels. The effect was spectacular and remains so to this day. This game has mastered itself on multiple levels: The single-player experience, multiplayer, and co-op single player which, in this case, is an entirely different game from the single-player experience. Basically players have an incentive to experience everything this game has to offer and they should. The game is a stealth action game but it allows players so much freedom of movement that you tend to forget that. Deciding whether to go in all guns blazing or stealthily remove your foes is part of the strategy of the single-player experience but essential to the multiplayer mode. Uniquely, players are pitted against each other as gunmen and spies, the latter of which is unarmed but capable of stealth kills by snapping players necks. Basically the spies have to achieve an objective and the gunmen have to stop them. Simple to say, more difficult to play out in practice. Further, the cooperative campaign where gamers can work with a friend to tackle Splinter Cell’s challenges is, unlike other games, its own experience unto itself and borrows little from the single-player game. Receiving multiple perfect scores when it was released, Splinter Cell: Chaos Theory shows off just how important multiplayer gaming was for the original Xbox when it debuted and, as its best exclusive title, best conveys the reasoning gamers would use to justify their purchase of the nascent console.

A Brief History of: The Xbox