Probably the single most dominant gaming format for most triple-A titles today, first-person shooters stormed the video games industry when they were popularised by a title from id Software called DOOM.

But DOOM wasn’t the first FPS, though it did take the genre to the heights it enjoys today. Depending on who you ask, first-person shooters either got their start with Wolfenstein 3D or as far back as 1987’s MIDI Maze by Hybrid Arts for the Atari ST.

Regardless of the origins of the genre, most every fan of it knows about some of its bigger names – especially today. Halo, Call of Duty, Overwatch… even battle royale games like PlayerUnknown’s Battlegrounds owe a lot to founding fathers of the FPS genre.

This list, however, is going to be about the top 10 retro first person shooter games. It consists of a smattering of PC and console titles as well as those that do not focus on story and those that build the entire game around it.

Developed by Parallax Software and Interplay Productions, this 3D space combat FPS will either induce thrills or vomiting depending on your tolerance for motion sickness. As one of the few early FPS games that truly placed the player in a three dimensional space, Descent is unique and, if you get used to it, a lot of fun. Considered a cult classic by many, Descent is buoyed mainly by its novelty and relative coherence as a game. During the FPS craze a lot of titles were released to cash in on it but only offered middling to abysmal gameplay in return. Descent is a solid game from top to bottom – it just might not be for everyone. 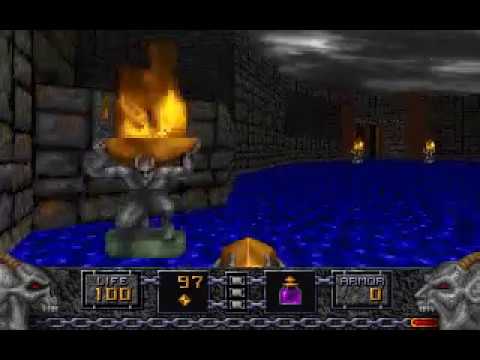 Probably the first official “DOOM clone,” Heretic is by id Software and is a basic port of the former game’s formula into a medieval, Tolkienesque setting. And it really, really works. Weapons are unique, the enemies are different, and there’s even a hint of a coherent story underneath it all. Basically, Heretic was way ahead of its time before it even had a right to be. We would say it was underappreciated but that’s far from the case.

The granddaddy of Bioshock, if you will, System Shock and its sequel provided gamers with a real taste of the kinds of immersive narratives that FPS games could offer. The later release of Half-Life would solidify this stance but System Shock did a great job at establishing the beach head for games like that. What really makes System Shock compelling is not only its innovative use of the FPS format but also its excellent attention to detail and atmosphere when telling its story. 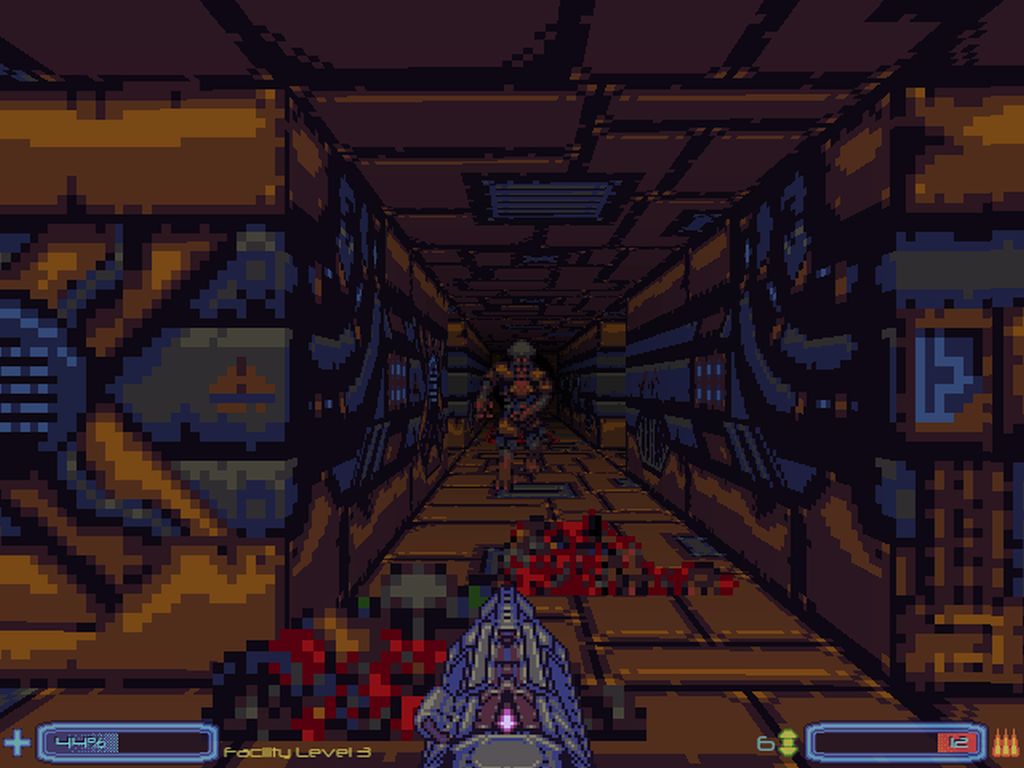 A sequel to Heretic, Hexen improved upon its predecessor in every way – much like DOOM 2 did. We include it on this list because a lot of early FPS games emphasized gun combat and ridiculous, action-hero premises. Heretic/Hexen did not and, instead, can be seen as previews of the types of FPS role playing games people play the heck out of today (we’re looking at you, Skyrim). Indeed, Heretic/Hexen probably helped pave the way for many of the early fantasy FPS games and even those like The Elder Scrolls which transformed the genre into a platform for RPG gaming. Not only that, but Hexen understood that DOOM’s unique atmosphere helped it to move units and it maintained the style introduced by its predecessor without delving into reductive things like demons and spirits from hell as that would put it too much in the DOOM-clone column. 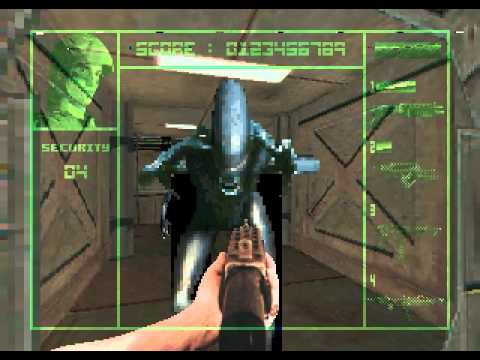 Every great act should have a swansong, and for Atari and the last home console it ever made, the Jaguar, that tune would be the FPS game known as Alien versus Predator. Though this would later become a slew of multimedia properties unrelated to this title, the game was an amazing entry to the Jaguar’s library and one that never left that system. If you want to play it today, you have to emulate it somehow. Still, as a killer app, it is pretty tough to beat Alien versus Predator on home consoles. Coming out at a time when most home systems couldn’t handle this type of PC sophistication, the Jaguar’s competent and addictive game stood out – but it wasn’t enough to stem the red tide eating away at Atari’s finances. A true showcase of early FPS gaming, it is a rough title by today’s standards. 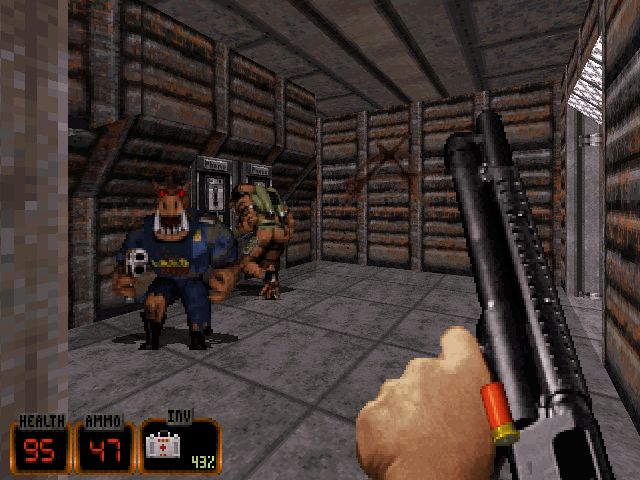 Known today for its then-edgy humor and crass approach in general, Duke Nukem 3D was a solid FPS title that spawned a line of sequels. It wouldn’t be wrong to call it a DOOM clone, it just wouldn’t be that fair. Duke Nukem 3D’s action was more arcade inspired than anything else. Powerups, secrets, you name it, it’s here. While DOOM had a reputation to uphold, Duke Nukem 3D was pretty unrestrained in its approach and that’s why it is a classic in the genre. While it is now more popularly known for the debacle that was Duke Nukem Forever’s development, Duke Nukem 3D helped audiences and devs get comfortable with the idea that not every triple-A title had to be earnest in tone.

4. Rise of the Triad

Beginning life as a sequel to Wolfenstein 3D, Rise of the Triad is one of the best non-id Software early FPS games to hit the streets. You can still see hints of the Wolfenstein influence here and there, but, for the most part, it is its own weird thing. Like Duke Nukem 3D, Rise of the Triad has insane weapons and a few conventions ported over from arcade titles. There’s also a story and an attempt at early photo realistic graphics. Often marketed as DOOM on speed, Rise of the Triad is fast moving and challenging, sometimes even bafflingly so. Where this game excels and innovates is in its different weapons and the uses for them. Huge arsenals would later become a staple of the genre, but Rise of the Triad was a pioneer in that respect. While PC players had DOOM, those that owned a MAC had Marathon. The devs behind this game would later go on to make Halo and Destiny, but you can see their early genius in this game and its sequel. Unlike DOOM, Marathon had an involved story but, like DOOM, it involved stuff in space. Outside of the FPS genre the two games are often only compared because MAC didn’t have a DOOM game but Marathon stands on its own without a problem. In fact, without DOOM, Marathon could have been the game that helped launch FPS’s into the stratosphere. And that’s no small thing, especially when you consider how much of an impact DOOM’s release had on PC gaming at the time. 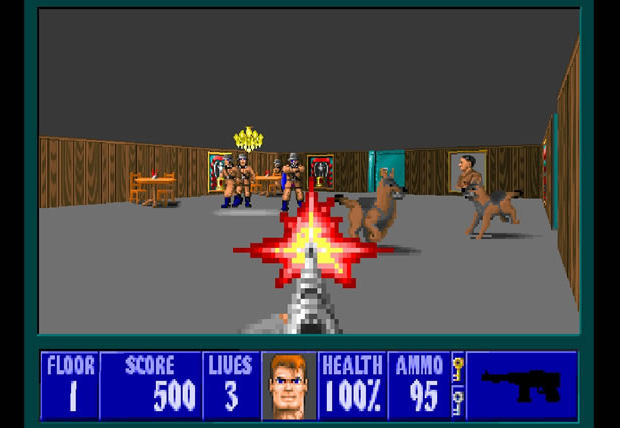 Nazis might be a tired trope for video games today but, back in the 1990s, they were still an edgy baddie to encounter. Wolfenstein 3D, with its swastika filled maze-like hallways and gigantic portraits of Hitler, was a new breed of game entirely. In many ways you can trace the beginnings of modern gaming to this title’s release. The first-person graphics were novel but the gameplay was largely similar to games like Tank for the Atari. What made Wolfenstein 3D so different was its unrestricted approach to subject matter and presentation. It didn’t shy away from gore, symbolism, and even inappropriate appropriations of history. 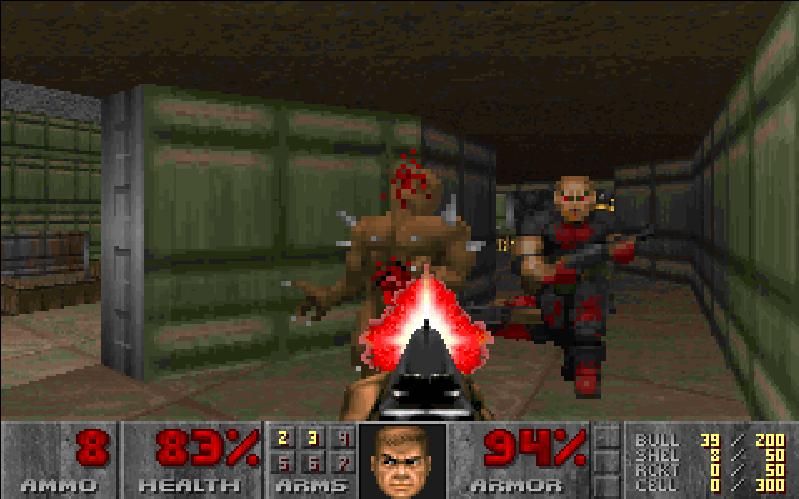 The game that started it all, for better or worse, DOOM began as a shareware phenomenon that eventually put PC gaming on the map. DOOM was so popular that even Microsoft wanted to buy it in order to secure it for Windows-based PCs. Spawning a host of sequels, the original DOOM game is mysterious, moody, and groundbreaking. Spartan on the narrative and minimalistic when it comes to introducing lore in the game, DOOM’s focus is on a kind of gameplay that is arcade in spirit but thoroughly modern in execution. This means that DOOM doesn’t ignore atmosphere, sound, music, or even the breadcrumbs of lore it does offer. DOOM approaches gaming as a cohesive whole and it shows from the minute you boot up the game for the first time. Outside of that, DOOM embodies the 1990s ethos of challenging accepted conventions in art and media as well as offering a nihilistic take on games in general. There is an ending, but there is no real winning in DOOM. Kicking off a craze that is perhaps only