One of the defining genres of the arcade, the light gun shooter was also a quintessential part of the Nintendo Famicom experience in the form of Duck Hunt and other titles. A hugely popular genre during its time, light-gun games were some of the most played in the arcade and either featured a rotating set of screens upon which you fired at enemies or a linear, almost roller coaster-like experience in the form of titles like Sega’s House of the Dead and Virtua Cop series. The latter, the focus of this article, employed Sega’s iconic 3D “virtual” graphics aesthetic for what was, basically, a cop game. Taking on hordes of criminals and their cohorts, players worked their way through fully realized virtual worlds and blasted away using the light guns that came attached to the arcade cabinet. Themselves fashioned in the likeness of their real world counterparts, these light guns had weight to them and a clicky trigger that registered each shot. Differing sound effects let you know what kind of weapon you were firing on screen while a tilt the gun and fire away from the screen mechanic provided a quick reload option. Developed by Sega AM2 (the same group that brought us Virtua Fighter and Virtua Racing), Virtua Cop was sent out to arcades in 1994 and was noteworthy for being one of the first titles to feature full polygonal graphics. Designed by legendary games producer Yu Suzuki, the game was eventually ported to the ill-fated Saturn where it came with a light gun peripheral and gameplay that was pretty much arcade perfect. Players also had the option to use a controller instead of the light gun for the home version. Since its initial release on the Saturn, Virtua Cop has made no appearances on any other system. If you want to play it today, you’ll probably need to pick up a Saturn and a copy for yourself.

Sometimes called a first-person rail shooter, Virtua Cop was a big deal when it came out because, like Namco’s Time Crisis series, it showed off just how cinematic and over the top the future of video gaming could be. Combining intense action with complex graphics, Virtua Cop not only resurrected that old arcade challenge people love in classic games but gave it a new coat in the process. A markedly different experience from the less-dynamic shooters that came out before it, Virtua Cop acted as a play demo for the games of today and, in many ways, anticipated the heavy combination of narrative and action gameplay we see in many games today. 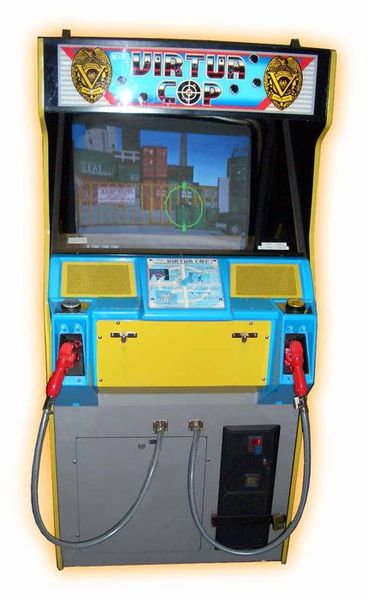 Among the titles inspired by Virtua Cop includes the multiplayer classic for the Nintendo 64, Goldeneye. According to the team behind this game, Goldeneye was initially conceived of as a first-person rail shooter in the vein of Virtua Cop but, once they started adding more tradition FPS elements, it ended up becoming the game it is known for being today. A legendary title from Sega’s hallowed arcade division, Virtua Cop deserves a playthrough with a friend if you want some quick gaming action.